Wolverhampton is a city that is proud of its rich, diverse cultural heritage and history. As a local authority over the past few years, we have been on a journey, exploring what equality, diversity and inclusion means not only to us as an organisation but to our wider communities.

As a local authority, we listen to our citizens about how our city can be more welcoming and inclusive. Rainbow City is first and foremost a celebration of our city’s commitment to the values of equality, diversity and inclusivity which aims, through a number of positive steps, to ensure that we treat all of our citizens with fairness, dignity and respect.

This commitment sets out our vision for what Rainbow City will achieve, why we are taking action now, what we will deliver and how we will keep Wolverhampton residents engaged throughout. The work of Rainbow City so far would not have been possible without input from our key partners. We would like to thank all those who responded to the Rainbow City consultation, as well as the City of Wolverhampton Council Rainbow Staff Equality Forum, Wolverhampton Business Improvement District (BID), Wolverhampton LGBT+, and Wolverhampton Homes. We look forward to continuing to work with them while developing new relationships with other partners as we collectively shape our Rainbow City. 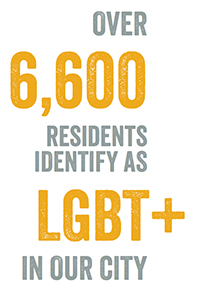 Thousands of Wolverhampton people identify as LGBT+. While we don’t have an exact number, we can make estimates of this figure based on regional data from the Office of National Statistics.1 This estimates that 3.2% of the West Midland’s adult population (aged 16+) identify as either Lesbian, Gay, Bisexual, or ‘other’. This means that there are over 6,600 residents aged 16 and above who identify as LGBT+ in our city. The actual figure will be even higher, given that the official statistics do not include those aged below 16.

In the UK, there is no regular collection of data to estimate the number of individuals who identify as trans. While the Government Equalities Office estimates that there could be between 200,000 – 500,000 trans and non-binary individuals across the UK,2 we do not yet have a reliable estimate for how many trans individuals live in Wolverhampton. One of our Rainbow City commitments, which are presented later in this document, is to collect local data which will allow us to estimate this.

LGBT+ is an umbrella term used to describe an individual who identifies as either Lesbian, Gay, Bi, Trans, or for anyone that identifies within the wider boundaries of the LGBT Community. Some may use the term ‘LGBT’ while others may use the term ‘LGBTQ+’. Language is a powerful tool and is constantly evolving, which is why the Council uses Stonewall’s list of terms as a guide. Some of these definitions are listed below.

Lesbian refers to a woman who has a romantic and/or sexual orientation towards women. Some non-binary people may also identify with this term.

Gay refers to a man who has a romantic and/or sexual orientation towards men. Also used as a generic term for lesbian and gay sexuality - some women define themselves as gay rather than lesbian. Some non-binary people may also identify with this term.

Bi is an umbrella term used to describe a romantic and/or sexual orientation towards more than one gender. Bi people may describe themselves using one or more of a wide variety of terms, including (but not limited to) bisexual, pan, or queer.

Trans is an umbrella term to describe people whose gender identity is not the same as, or does not sit comfortably with, the sex they were assigned at birth. Trans people may describe themselves using one or more of a wide variety of terms, including (but not limited to) transgender, transsexual, gender-queer, gender-fluid, or non-binary.

Gender is often expressed in terms of masculinity and femininity. It is largely culturally determined and is assumed from the sex assigned at birth.

Why are we taking action now?

Despite sexual orientation and gender reassignment being protected characteristics under the Equality Act 2010, we know that many people from LGBT+ communities face unfair discrimination and harassment which has a huge detrimental impact on their health and wellbeing. The National LGBT Survey, led by the Government Equalities Office,1 found that:

LGBT+ people show lower satisfaction with their lives than the general population.

1 in 4 survey respondents said that had experienced mental health issues in the 12 months prior to the survey, with evidence showing that anxiety, depression, self-harm, and suicide are more prevalent in LGBT+ communities.

LGBT+ individuals are more likely to be victims of hate crime, and this is often unreported.

Over 40% of respondents had suffered verbal harassment and/or physical violence because of their sexual orientation and/or gender identity within the preceding 12 months.

Over 90% of these incidents went unreported because respondents felt that reporting would not make any difference.

Feedback collected during Wolverhampton’s ’s LGBT+ health conference in 2019 suggested that these national findings apply to city residents.2 Other feedback collected during this conference indicated that LGBT+ services were often difficult to find, and that there was a desire for the Council to strengthen its work with key city partners (including the NHS, local businesses, and charitable organisations) to champion LGBT+ rights across our city.

This was echoed by members of the Council’s internal Rainbow Staff Equality Forum, who worked with the Council’s senior leadership to identify steps that we could take to support LGBT+ residents, making Wolverhampton a more fair, equal, and diverse city. These initial ideas were shared through an online public consultation which ran from May to July 2021.

What is Rainbow City?

Rainbow City is a collective term for a series of initiatives that will celebrate and put into practice Wolverhampton’s commitment to being a fair, diverse, and inclusive city. While many of these initiatives are targeted towards supporting Wolverhampton’s LGBT+ communities; the benefits they will bring will be shared by all.

Key to Rainbow City’s success will be making the most of our strong working relationships with key city partners, including health providers, local businesses, charities, and community groups. Only through working together can we ensure that the voice of our city’s

LGBT+ communities are heard and that our Rainbow City actions are designed around their needs.

Rainbow City will see action taken ‘on the ground’ to make our city more welcoming to LGBT+ people: making it easier for them to find support services, providing them with more opportunities to improve their wellbeing, tackling hate crime, and increasing awareness of the challenges they can face. We are aiming to implement all of these changes by the end of 2025.

Our vision for a rainbow city:

Rainbow City aligns with and progresses multiple city priorities, including:

The delivery of Rainbow City will be delivered around five themes, which emerged through the responses we received during the Rainbow City consultation.

We will publish a Rainbow City Action Plan alongside this commitment document. This will provide details on the actions that we will deliver under each theme, as well projected timelines for each. An equalities impact analysis will be undertaken for all actions to make sure that any activity is fair and inclusive.

Our aim: A dedicated digital offer for Wolverhampton’s LGBT+ communities, serving as a single access point for information relating to LGBT+ themed city events, communications, and signposting to sources of support.

Our aim: A city whose public institutions celebrate diversity, working alongside a thriving LGBT+ voluntary and community sector that has access to meeting space and funding opportunities to host their own inclusive events.

Our aim: A city where LGBT+ residents have equal access to services to support their mental and physical health needs. Residents can access these services free of any judgement or discrimination, and effective signposting is in place for any specific health services that are not available locally.

Our aim: A city where everyone feels confident to be who they are without fear of judgement and abuse, where any discriminatory behaviour is challenged and actioned against.

Our aim: A city that actively promotes awareness of the challenges faced by its LGBT+ communities, providing accessible information for all residents who wish to find out more, and where professionals working with the LGBT+ community have access to appropriate training and development opportunities.

Monitoring and sharing our progress

We are committed to measuring the success of all initiatives introduced as part of Rainbow City. Each action in our Rainbow City Action Plan will list specific measurables that will be regularly monitored to check that we are on track to meet our objectives.

Our findings will be shared with the people of Wolverhampton through our website, social media channels and via the Rainbow City Charter Network.