A limousine advertised to take children to their school prom nights that was uninsured and driven by an unlicensed chauffeur has been seized in a joint operation by City of Wolverhampton Council and police.

The Mercedes-Benz S-Class S63 AMG, worth £170,000, has now been taken off the streets and impounded after it was found to have no insurance for business use or for hire and reward.

The driver also admitted that he did not hold a licence, meaning he had not been vetted to be a fit and proper person to drive members of the public.

The council discovered the potentially dangerous chauffeur service being advertised online. It decided to carry out a test purchase and booked a journey, at a quoted cost of £150, to pick up a ‘businessman’ from the railway station and take him to a nearby hotel.

However, the businessman was an undercover police officer and upon arriving at the destination, the driver was questioned under caution by city council’s licensing compliance team.

City of Wolverhampton Council has received a share of funding from the Office for Product Safety and Standards, part of which is to enable test purchasing from suspected unlicensed businesses.

Greg Bickerdike, City of Wolverhampton Council’s licensing manager, said: “We have taken an unlicensed driver and an uninsured vehicle off the road that was advertising its services online to unsuspecting customers, including taking children to their school proms.

“No licence means that this driver could literally have been anyone and potentially a danger to the public, there would have been no checks to vet him as a fit and proper person. The vehicle was not insured in the event of an accident.

“While unlicensed taxi drivers are rare, it is not uncommon to see this problem with the luxury prom car market. We need to get the message across to schools, parents and guardians that it is not safe to just book one of these luxury car hire services from an online advert without doing your research to make sure they are legitimate.

“If a company has neither licence in place, you can report them to the DVSA, which has the power to remove limousines from the road.

“A professional company will also have a child protection policy in place which you should ask to see.

“Since the incident, the company has been advised on how to become licensed and undertake legitimate licensed bookings safely. The company has been very co-operative and has offered information about other companies operating in a similar fashion, providing intelligence to enable targeted operations in future.”

The driver faces prosecution and a potential fine and points on his driving licence for driving with no insurance. The company will need to pay a fee to have the vehicle released or it will be crushed. 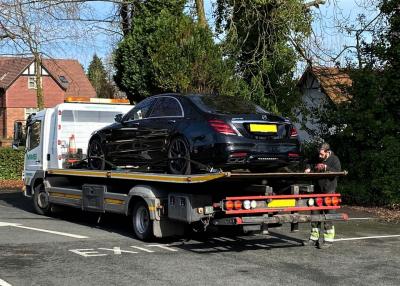