A private hire driver who lives in Wolverhampton, but is licensed by Shropshire County Council, has been convicted of plying for hire and driving without insurance in the Black Country city.

Mohammed Rafiq, aged 46, of Deansfield Road, Wolverhampton, was caught during a joint operation between City of Wolverhampton Council and West Midlands Police in September 2019.

Plain clothes police officers approached Mr Rafiq in Wolverhampton city centre on 28 September and asked him to take them to a nearby hotel.

Rafiq agreed to take the fare even though it had not been pre-booked with an operator, which is illegal and contrary to Section 45 Town Police Clauses Act 1847.

Mr Rafiq also committed the offence of driving without insurance as his insurance policy states that all journeys must be pre-booked.

Officers from City of Wolverhampton Council interviewed Rafiq, who initially denied any wrongdoing, however he pleaded guilty to both offences when he appeared at Wolverhampton Magistrates court earlier this month.

He received 8 penalty points on his licence and was ordered to pay total fines and costs of £1,000.

Councillor Philip Page, chairman of the council’s regulatory committee, said: “I am glad that our officers, working in partnership with the police, were able to take action against a driver flouting the law.

“We will take action against all taxi drivers who put the people of Wolverhampton at risk by driving without valid insurance, regardless of which local authority they hold a licence with.”

The matter has also been reported to Shropshire Council, who currently licence Mr Rafiq, for their consideration.

City of Wolverhampton Council is currently running a ‘Get Home Safe’ campaign which aims to make sure members of the public are aware of the differences between hiring private hire cars and black hackney cabs on the street.

The campaign also highlights the risks involved in taking an unlicensed vehicle and how to spot a legitimate taxi or private hire driver. 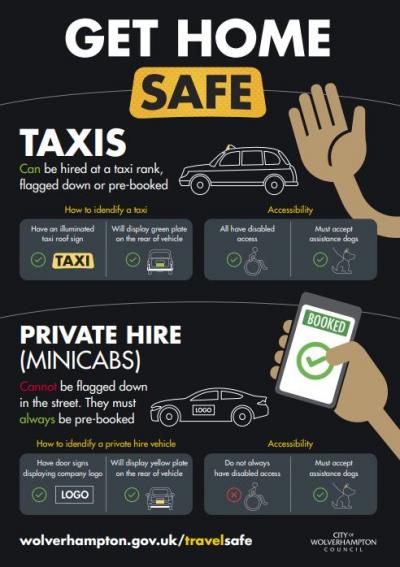