Over a thousand pupils have enjoyed a theatrical take on Wolverhampton's unique Flu Fighters stories, which are encouraging more and more children to have their flu vaccination.

Actors from Gazebo Theatre in Education have brought to life the Flu Fighters' annual battle against the invading flu aliens Chilly, Achy and Snotty for a special touring production which has been performed to children from a dozen local schools in recent weeks.

It premiered to an audience of more than 250 pupils from Oak Meadow, Long Knowle, St Andrews and Woodfield primary schools before Wolverhampton Clinical Commissioning Group's Annual General Meeting at Molineux Stadium earlier this year, and has subsequently been 'on tour' to Parkfield, Holy Trinity Catholic, Whitgreave, Bilston C of E, St Mary's, Bushbury Hill, Perry Hall and Rakegate schools where it was performed before a combined audience of over 1,000 children.

Gazebo's innovative adaptation of the two Flu Fighters stories sees our heroes – the Nurse, played by Fran Richards, Ani (April Hudson) and Daniel (Dominic Thompson) – recall their past encounters with Chilly, Achy and Snotty and recruit local children as Flu Fighters as they prepare for the impending flu invasion this winter.

John Denley, the City of Wolverhampton Council's Director of Public Health, said: "Like the books on which it is based, this is an exciting and educational production which really gets over to its young audience the importance of having their free flu vaccination this winter."

The Flu Fighters campaign, devised by the council, CCG and the Royal Wolverhampton NHS Trust, helped bring about a 13% increase in the number of children who received their free nasal spray in 2018. It returned this year and early data suggests uptake of the vaccine in Wolverhampton has increased once more.

This year, all children from Reception to Year 6 at infant, junior and primary schools in Wolverhampton, and all children in special schools, are offered the free flu vaccination at their school.

Parents can see the full vaccination schedule, and read more about the vaccine at Flu Vaccines. Any child or young person at any school which has already been visited by the Flu Fighters nurses and who has missed their vaccination can get it either by contacting their GP or at a special catch up clinic at Phoenix Centre, Parkfield Road, WV4 6ED on Saturday 14 December from 9am to 1pm.

As well as the vaccination for children, people with long term health conditions, the over 65s, carers and care staff, people in long stay residential care homes and pregnant women are also eligible for a free vaccination through their GP or pharmacist, while everyone else can get the vaccine from many local pharmacies for a small charge. For more information, please visit Flu Vaccines.

The Flu Fighters campaign is also in the running for the Best Creative Comms award at the sixth annual comms2point0 UnAwards next week. The comms2point0 UnAwards recognise genuine creativity, innovation and solid results. The winners will be announced at a ceremony at the Everyman Cinema in Birmingham on Friday 6 December. 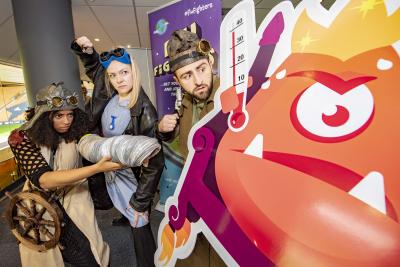