Youth Lab helps to shape high streets of the future

Young people from Wolverhampton are helping to shape the high streets of the future.

The resulting project – Youth Lab Wolverhampton – focuses on how young people can get involved in co-designing their city, particularly through arts and culture.

A series of Youth Lab events will be taking place over the next 12 months. The first, an online drawing workshop earlier this month, saw local artist Dan Griffin-Hayes capture the thoughts of young people on what improvements they want to see made to Wolverhampton city centre and Bilston and Wednesfield town centres.

His finished artwork highlights a range of ways in which young people would like their town and city centres to be improved, including more colour and greenery, more independent businesses, multi purpose public spaces and additional places to relax in. They also suggested walking trails incorporating landmarks, statues and other works of art, the creation of legal graffiti walls and a celebration of Wolverhampton's existing architecture.

The results were based on a survey of young people who were asked for their opinions of Dudley Street in Wolverhampton and Wednesfield and Bilston High Streets and will also help to shape the vision for Wolverhampton’s bid to the Government’s Town Fund.

A Town Deal Board has been established consisting of key partners from across the political and business spectrum to advise on the development of Wolverhampton city centre and Bilston and Wednesfield centres ahead of a final bid of up to £25 million to the Towns Fund. If the bid is successful, the funding will be used as a catalyst to accelerate the ongoing transformation of these areas and attract further investment and development.

Councillor John Reynolds, the City of Wolverhampton Council's Cabinet Member for Children and Young People, said: "The Actors of Urban Change programme is a great opportunity for us to even more closely involve our young people in the development of their city, and to give them a say. The first piece of work, completed in collaboration with Dan Griffin-Hayes, highlights a number of ways in which we could further improve our city and district centres.

"Earlier this year, we launched our ambitious new Youth Engagement Strategy, #YES, designed to help Wolverhampton's children and young people reach their full potential and be healthier, be connected and be heard. The work of Youth Lab Wolverhampton goes hand in hand with this; there are lots more exciting activities planned over the coming months so I would encourage young people to get involved."

Liam Smyth, Creative Producer at Creative Black Country, said: "Being part of Actors of Urban Change is an outstanding opportunity to get young people excited about being creative and making a difference in their city.”

Professor Laura Caulfield, Founding Chair of the Institute of Community Research and Development at the University of Wolverhampton, added: "Actors of Urban Change brings such exciting possibilities for us. We’re thinking all the time about how we work with young people and how we work with organisations to co-produce work to make sure that young people’s voices are heard.”

Anyone who would like more information about Youth Lab Wolverhampton, or would like to take part in the project, is invited to please email youthcouncil@wolverhampton.gov.uk or info@creativeblackcountry.co.uk. 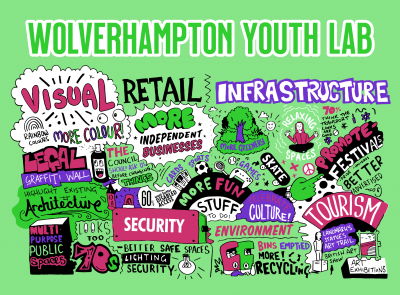 : Artwork created by Dan Griffin-Hayes captures the views of children and young people about how their city and town centres could be improved. PLEASE CREDIT DAN GRIFFIN-HAYES