Three teenagers had some help from Wolverhampton Wanderers players in preparation for the kick off of this year’s search for the Young Citizen of the Year.

Samuel Iyawe, 15, who won the 2019 award, was joined by last year’s finalists Melvin Riley, 18 and Jude Aston, 15, at Wolves’ training base at Compton Park. Chris Thompson from Tettenhall Rotary Club was also present, representing the city’s Rotarians who organise the prestigious awards.

Samuel, who has grown up in the care system, was named Young Citizen of the Year in 2019 in recognition of being a voice for young people in the city and trying to improve the lives of others while working with the Children in Care Council and the City of Wolverhampton Youth Council. He is extremely passionate about combatting knife crime.

During the meet and greet, the youngsters got the chance to tell Wolves players Adama Traore, Max Kilman, Diogo Jota, Bruno Jordao and Benny Ashley-Seal of their community efforts which saw them nominated for the award. It was also their chance to ask the players about their successes this year, with Wolves flying high in the Premier League and heading towards the latter stages of this year’s Europa League.

Max Kilman said: “I think it’s good that children are able to express themselves in their community and I’m very proud to have young people like this in Wolverhampton.”

Benny Ashley-Seal added: “It’s great to be involved and see what these young people have achieved. It is important for us as footballers to see all the good things that happen in our local community.”

Councillor John Reynolds, the City of Wolverhampton Council’s Cabinet Member for Children and Young People, said: “Young people in Wolverhampton do some incredible things and it is key that they are recognised for going above and beyond. Doing so can only help in ensuring that the city’s future is a bright one.”

The search for this year’s Young Citizen of the Year kicks off on 1 March.

Organised by the city’s 5 Rotary clubs, in partnership with the City of Wolverhampton Council, Express & Star, Wolverhampton Wanderers Foundation, The Way Youth Zone, The James Beattie Charitable Trust and Waitrose, it recognises young people aged 13 to 19 who have made a significant contribution to the city, people around them and their local communities.

Anyone can nominate a young person who lives, goes to school or works within the City of Wolverhampton. For more details about the award, plus entry forms, please visit Young Citizen of the Year Awards. 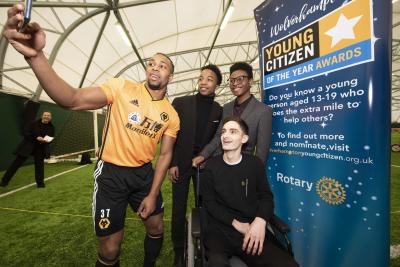 Wolves winger Adama Traore meets Wolverhampton Young Citizen of the Year 2019 Samuel Iyawe (back right), along with Melvin Riley and Jude Aston, who were both highly commended last year