World snooker stars to return to Wolverhampton after tournament success

The biggest stars in snooker are set to return to Wolverhampton next year after the success of last week’s Cazoo Players Championship at Aldersley Leisure Village.

City of Wolverhampton Council worked closely with the World Snooker Tour (WST) to stage the event in the city for the first time, with more than 4,000 people attending across the 7 days.

The tournament was also televised by ITV4 and a range of other broadcasters worldwide.

Over 90 event professionals and the highest ranked 16 players in the sport stayed in the city’s hotels. That combined with customer spending throughout the week brought an estimated economic benefit to the local economy of £350,000.

“It’s gone incredibly well for our first time in Aldersley and in Wolverhampton, and we’ve had such a delightful reception from fans and also from staff and people at the venue.

“Everyone’s been so friendly and so kind and welcoming to the team and the crowds themselves have been incredible, really vocal and coming in big numbers as well, so much so that we had to increase our seating capacity.

“We did a re-rig on Wednesday night to go from 2 table to 1 and that extra seating was needed because of the demand being so high, so it’s been a great week for us.

“The players really enjoy these high calibre events as they’re longer games and more prize money and they’ve enjoyed it here with the support.

“It’s also a nice central venue, so easy to get to and we are looking to include Aldersley in our plans for next year, probably as a similar tournament.”

“Many visitors were thrilled to have world snooker on their doorsteps, while others travelled from all over the globe to be here.

“The successful staging of the Grand Slam of Darts and big name comedy events at WV Active’s Aldersley Leisure Village showed what a great venue it is – and I am delighted the Word Snooker Tour are keen to return next year with this prestigious televised tournament.

“This is all part of the Council’s overall 5 year events strategy to bring the very best in art, music and sport to the city to boost the local economy, create new jobs and build an outstanding cultural reputation.

“2022 is a huge year for events in Wolverhampton with the Cazoo Players Championship adding to British Art Show 9 - which is currently running at Wolverhampton Art Gallery and University’s School of Art – the Creation Day music festival, Commonwealth Games cycling time trial, and the reopening of the refurbished Civic Halls.” 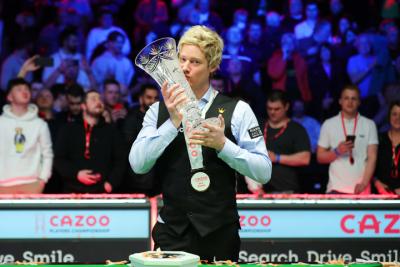