Preparation work is starting for the development of a landmark memorial in Wolverhampton which commemorates the bravery of 19th century Sikh soldiers.

The Saragarhi Monument will stand on land in Well Lane in Wednesfield and the latest images of the statue, by Black Country sculptor Luke Perry, have also been revealed, giving a glimpse of how the final memorial will look.

The statue was commissioned by Guru Nanak Gurdwara whose members have undertaken a fundraising programme for the monument. City of Wolverhampton Council will also contribute £35,000 towards the memorial after it agreed to transfer land to the Gurdwara on a 99 year lease.

New images of the memorial as it moves through the casting process have been revealed, showing separate sections of the figure of a Sikh soldier. The bronze sections will now be carefully pieced together by Mr Perry, and the completed statue, which will stand at 10 feet tall, will be officially unveiled in September.

The statue will commemorate the Battle of Saragarhi, a conflict which took place on 12 September, 1897. The conflict saw 21 soldiers from the 36th Sikh Regiment of the British Indian Army fight against thousands of Afghan tribesmen.

The battle centred on an outpost in Saragarhi which was surrounded and attacked by the tribesmen. The 21 soldiers inside the outpost chose to fight to the death rather than surrender. A further man, believed to be a Muslim cook who was not enrolled as a solider, also died after choosing to join the battle to defend the outpost.

The conflict is considered by military historians to be one of the greatest last stands in history. Saragarhi Day is commemorated by the Indian Army's 4th battalion of the Sikh regiment every year on 12 September. The statue in Wednesfield is also planned to be unveiled on this date.

Councillor Bhupinder Gakhal, Cabinet Member for City Assets and Housing at City of Wolverhampton Council and ward member for Wednesfield South, has worked closely with the Gurdwara to develop plans for the memorial.

He said: “I’m thrilled to be on site to see the start of the work to create this important monument. It will be very important to a large number of people, both in the city and beyond.

“The bravery shown by the soldiers at Saragarhi was breath taking and I hope that this fantastic statue will help us to recognise the contributions they made as well as celebrating the city’s diversity and increasing visitors to Wednesfield.”

Councillor Gakhal said his interest in the Battle of Saragarhi stemmed back to a family trip to India in December 1980 when he saw a calendar on the wall of a bank.

“The picture on the calendar was in black and white, it was of old ruins and Sikh soldiers stood on guard. I was just transfixed on this photo and asked the bank manager what it was all about,” he said.

“The bank manager looked at me over his spectacles and said, ‘Son that photo is of Saragarhi it's one of the famous last stands, it's a part of your history, research it’ - and research I did.

“I am thrilled that the image I saw in that photograph all those years ago will now be commemorated in this wonderful memorial in Wednesfield for more people to learn about the battle at Saragarhi.”

City of Wolverhampton Council Leader, Councillor Ian Brookfield, said: “I am delighted that the council is able to support this incredible monument to the brave soldiers who made the ultimate sacrifice in the service of the British Indian Army.

“It’s a powerful symbol of both the diversity and the togetherness of our city and this impressive artwork celebrates that. We hope that the memorial will bring in thousands of visitors a year, helping us to show people what our city has to offer as well as boosting the local Wednesfield economy.”

Sculptor Luke said he believed the statue, which will stand on a 6 foot plinth and have a large metal plate depicting the hills around Saragarhi behind it, could be the best he has ever made.

“I’m really excited to be progressing with the work for the Saragarhi Monument. Each commission that I create is inspired by the people I work with,” he said.

“With artworks like this I want to create sculptures that are a visible marker of the under represented but vital, real people in our communities because when people are represented, they are empowered.

“I am so proud to be a part of the positive movement in art that is recognising the rich history of our past. The heritage of our diversity has been overlooked for too long and it's people like Councillor Gakhal and his colleagues whose passion is bringing that history to light for us all, it's an honour to be able to work on such an important piece.” 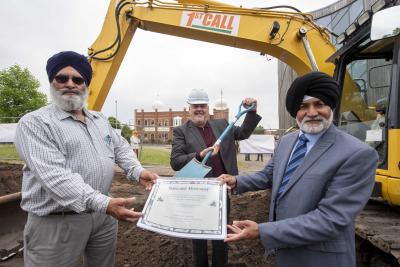 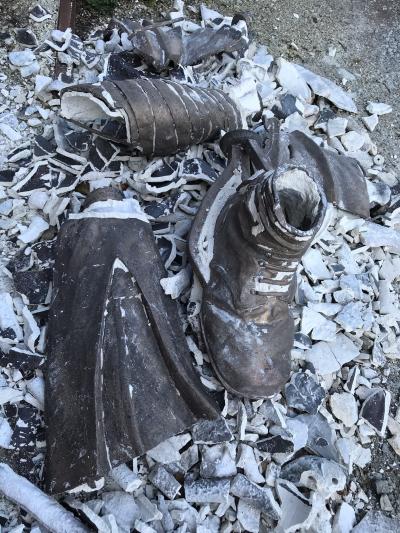 Boots and fabric section of the Sikh soldier 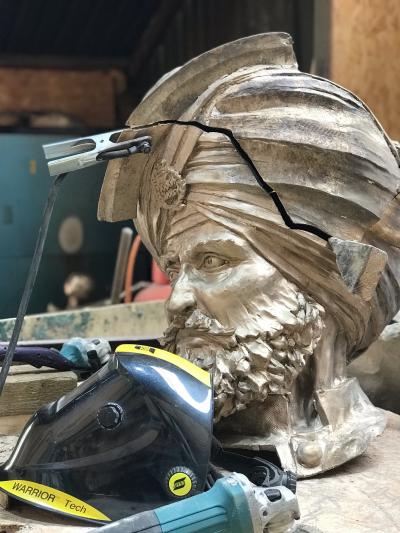 The head section of the figure of the Sikh soldier