Young Wulfrunians were recognised for their outstanding community efforts at this year’s Wolverhampton Young Citizen of the Year Awards.

The event, which is devised and sponsored by the city’s Rotary Clubs, was hosted by the Mayor of Wolverhampton Councillor Sandra Samuels OBE in the Mayoral Suite at the Civic Centre last week.

As in previous years, the judges faced the difficult task of whittling down a number of nominations to the shortlist, with two winners being declared overall.

The winner in the 13 to 18 year old category was Keisha Riley, a 15 year old from Bilston. Keisha was nominated by the Afro Caribbean Community Initiative (ACCI) for her extensive support to the service. Keisha is also a member of youth voice groups in the city, including Wolverhampton Youth Council and had an extensive involvement in the city’s National Lottery funded HeadStart project, which came to an end in 2021.

Keisha said: “It was amazing to win the award, as not only did I win it for myself and ACCI, but I won it for my community.”

Runner up in this category was former Wolverhampton Girls’ High School pupil Ramandeep Nijjar, 18, nominated by a fellow pupil for her service at school and in her community.

The winner of the 19 to 25 year old category was 20 year old Kye Barton, who was nominated for his outstanding work supporting care leavers in Wolverhampton though the city’s Care Leavers Forum. A care leaver himself, Kye now works for the city’s Strengthening Families Hub service, which offers early help and support to children, young people and families across the city.

Kye said: “It is with great pleasure to accept the award for Citizen of the Year. Not only does this award recognise the hard work of the forum I lead but hopefully also provides an inspiration for other children in care and care leavers that they are more than capable of achieving greatness and have a real impact on their communities."

Runner up was Emma Falconer, 19, for outstanding leadership displayed in the Bilston Girl Guides and her wider community service.

Special recognition awards were also presented to Louis Johnson, 16, for his outstanding charity work which has seen him raise of £48,000 for over 18 charities since he was the age of 9, and Megan Baynham, 22, for her work in championing the voice and rights of young people with special educational needs and disabilities (SEND) through the city’s HY5! youth voice group.

And in recognition of the outstanding quality of all this year’s finalists, Caroline Smith, 16, Annette Okeke, 18 and Molly Kerin, 18, each received a donation to a charity of their choice.

Mayor Councillor Samuels OBE said: “On behalf of Mayoral and the City of Wolverhampton Council, I wish to congratulate our extraordinary Young Citizen of The Year finalists and winners for 2022. These exceptional young people have gone above and beyond, providing support and services to our communities and organisations across the city. Well done to them all.”

Councillor Beverley Momenabadi, the City of Wolverhampton Council's Cabinet Member for Children and Young People, said: "The nominations that were received for this year's Young Citizen of the Year just go to underline the fact that we have so many amazing young people in our city, and I would like to congratulate everyone involved."

The awards are spearheaded by the city’s Rotary Clubs alongside the council, Wolverhampton Wanderers Foundation, the Express and Star, The Way Youth Zone, Carvers Building Supplies Ltd and Wednesfield Magazine and celebrate 13 to 25 year olds who live, learn or work in the city and have gone the extra mile to help other people or organisations. For more information, please visit Wolverhampton Young Citizen Awards. 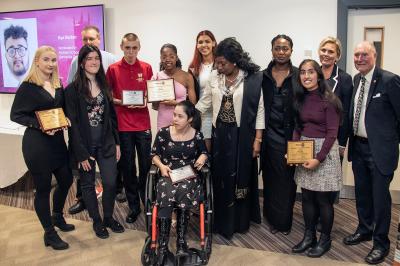 Finalists of the Wolverhampton Young Citizen of the Year Awards 2022 celebrate their success with the Mayor of Wolverhampton, Councillor Sandra Samuels OBE (centre right), Roger Timbrell, Chair of the Awards Organising Committee and Rotarian (right), and Lisa Potts, guest of honour at the awards and Honorary Freewoman of the City of Wolverhampton (second from right)