Wolverhampton’s street lights are getting smarter, greener and more cost effective under a widescale transformation scheme.

Work has begun on installing 27,570 LED street lights, which will replace the existing sodium lamps used in both residential and city centre streets.

When complete, this first phase of the City of Wolverhampton Council’s new Smart Lighting scheme will make savings of around £1 million each year in energy costs.

The LED replacements will also reduce carbon emissions by more than 5,600 tonnes a year and save 6,642 kilowatts per hour of energy compared to the previous 12 months.

A second phase of the scheme, due to start later this year, will see the new street lights getting smart by connecting to a central management system.

This will allow them to be remote controlled and dimmed or brightened depending on the need, for example in helping people see their way to public gatherings or football matches. This smart response will help provide further energy savings and increased efficiency as well as helping people feel safe.

The £5.8 million project has been co-funded by the City Council and a grant of £2,403,136 from the European Regional Development Fund (ERDF).

Further phases of the project will involve a partnership with the Canal & River Trust to install solar lighting along stretches of the canal to extend the usable hours of the canal towpaths for cyclists and pedestrians.

Other works include residential on street charging points for electrical vehicles installed in locations across the city, and eco counters which monitor and display the amount of cycle journeys and the reduction in CO² emissions.

The Smart Lighting scheme supports the City Council’s Digital Infrastructure Strategy which aims to futureproof the city’s digital infrastructure and use smart technologies to make Wolverhampton a more attractive place to live, run a business and invest.

“These are all areas that are highlighted in Wolverhampton’s Sustainability Strategy and Implementation Plan and the planned work will help us to make sure there is less cost to our city, both financially and in terms of energy.

“The Smart Lighting scheme also fits with the UK wide Smart Cities agenda, making us one of only a handful of cities in the country leading the way in using this technology.

“I’m really pleased to see work starting on the first phase of the project and, as it develops, I hope the changes we are making will help residents to choose alternative methods of transport.” 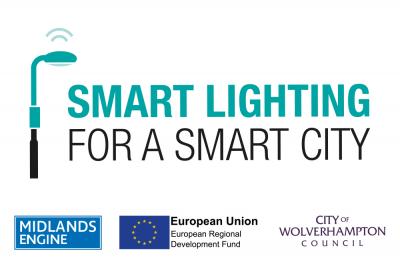 Wolverhampton’s street lights are getting smarter, greener and more cost effective under a widescale transformation scheme