A youngster who came through the care system has been crowned Wolverhampton’s Young Citizen of the Year at an awards ceremony in the Mayor’s parlour.

Community minded young citizens were nominated for a host of reasons, from helping vulnerable people, raising money for charities and being excellent community ambassadors - and the winner was announced at a ceremony hosted by the Mayor of Wolverhampton, Councillor Claire Darke.

As ever, the judges had the difficult task of whittling down the shortlist to 8 nominees and then choosing a winner – with a winner and 2 runners’ up eventually being selected.

Samuel, who has grown up in the city’s care system, was nominated for the award by Alice Vickers from the City of Wolverhampton Council for being a voice for young people in the city and trying to improve the lives of children in care when working on the Children in Care Council, along with the city’s Youth Council. He is extremely passionate about combatting knife crime.

Samuel said: "It feels overwhelming and exhilarating to have won this award.

"It was fantastic to be here in front of so many people who have come to see all the nominees. It was very unexpected for me. The other nominees have all done so many incredible things for the city and their schools.

"Everyone had an equal chance of winning. I want to thank everyone who has supported me on my very long journey and I hope to continue to work to improve the lives of children in Wolverhampton."

Mayor of Wolverhampton Councillor Darke, who was part of the judging panel said: “It gives me a great sense of pride in our city’s youth to see young citizens like Samuel work so hard to make Wolverhampton a better place.

“By drawing from his own personal experiences, his contributions to society have undoubtedly helped improve the lives of many young people across the city and guided them towards a positive future.”

The other highly commended finalists at the event included Neve Francis, aged 14 from Moseley Park School; Katia Medjdoub, aged 17 from Our Lady and St Chad Catholic Academy; Clinton Omoruyi, aged 15 from Heath Park School and Eve Williams, aged 14 who is home schooled and volunteers with The Way Youth Zone.

For more information on this year’s finalists and why they were nominated, please visit Young Citizen of the Year Awards 2019.

The awards are spearheaded by the city’s Rotary Clubs alongside City of Wolverhampton Council, Wolverhampton Wanderers Foundation, Express and Star, The Way Youth Zone and Waitrose and celebrates 13 to 19 year olds who live, learn or work in the city and have gone the extra mile to help other people or organisations. 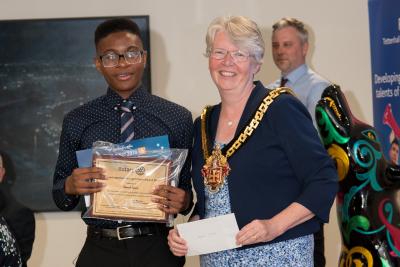 Winner of the Wolverhampton Young Citizen Award, Samuel Iyawe, receives his award from the Mayor of Wolverhampton, Councillor Claire Darke