City of Wolverhampton Council’s Trading Standards team has been recognised at a national level for seizing over 2,000 illegal ‘Squishes’ due to alarming health and safety risks to young children.

The team carried out test purchases on the popular toys to ensure the products were legitimate and safe for children to play with.

The items were sent to Hampshire Scientific Services to initially test for phthalates, previously found in ‘fruit head’ dolls in 2016.

However, following the test purchases, the Squishes failed several health and safety regulations and confirmed to be fake replicates of the popular toys.

The forged toys, imported from China, arrived in loose packaging with manufacturing details, test certificates and CE markings all proved to be fake.

CE marking is a certification mark that indicates conformity with health, safety, and environmental protection standards for products sold within the EU.

A number of Squishes also breach the Trade Mark legislation for resembling registered Trade Marks such as Hello Kitty and Emojis that have not been produced with consent from legitimate Trade Mark holders.

Many Squishes are scented, and young children could confuse them with food and risk trying to eat, suck or swallow the products which could cause serious injury and in extreme cases, death.

Councillor Steve Evans, Cabinet Member for City Environment at City of Wolverhampton Council said: “I’m pleased the team have been recognised at national level for the work they do to protect the public.

“It’s important we carry out these test purchases, especially on new products where often fake goods are replicated putting customers at risk.

“Our local traders have also been affected and left out of pocket due to trusting suppliers not complying with the law.

“We are working with other local authorities to act against the distributors of these products, to ensure children are protected from the risks posed by these dangerous toys.

“I would like to thank the trading standards team for their continued efforts across all workstreams, putting the safety of the people of Wolverhampton first in everything they do.”

Customers and Traders who believe they have purchased fake Squishes are encouraged to contact the City of Wolverhampton Council’s Trading Standards team on intel@wolverhampton.gov.uk or their partners at the Citizens Advice Consumer Service on 03454 04 05 06. 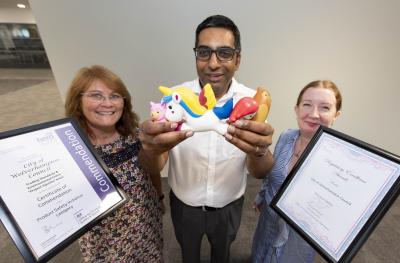 City of Wolverhampton Council’s Trading Standards team has been recognised at a national level for seizing over 2,000 illegal ‘Squishes’ due to alarming health and safety risks to young children