Wolverhampton made history yesterday (Wednesday 28 July) by becoming the first English city to sign the European Circular Cities Declaration – a major environmental agreement designed to accelerate the adoption of circular economies across the continent.

In signing the declaration, which was developed by a broad partnership of European stakeholders, led by ICLEI Europe*, Wolverhampton joins a high-profile network of major European cities, including Helsinki, Oslo, Prague and Florence, committed to creating resource-efficient, low-carbon and socially responsible societies.

The certification of Wolverhampton as a Europe-leading centre of green growth is spearheaded by the city’s expertise in sustainable construction. Part of the University of Wolverhampton, its Springfield Campus will be Europe’s largest specialist academic centre for Architecture and Built Environment, offering world-class teaching, research and training in Modern Methods of Construction (MMC) and revolutionary remediation techniques to unlock brownfield development.

The UK Green Building Council reports that 40% of all UK carbon emissions originate from the built environment. Tackling how the construction industry manages waste is therefore critical to meeting the UK government’s 78% carbon reduction targets by 2035, with the urgency of the growing construction epidemic even more pressing as the UK prepares to host the UN Climate Change Conference (COP26) later this year.

Firmly establishing the city’s MMC expertise is the arrival of a new £17.5m National Brownfield Institute (NBI), created to help the construction industry unlock disused land for greener, safer and cheaper building projects. Homes built using MMC can be built on-site up to four times faster and have up to 80% fewer defects, substantial eradicating waste and carbon emission levels from the construction process.

Councillor Ian Brookfield, Leader of City of Wolverhampton Council and Portfolio Holder for Economy and Innovation at the West Midlands Combined Authority (WMCA) – the region’s governing authority – said: “Wolverhampton is well-known for its industrial heritage, and while manufacturing remains the fabric of our economy, there is still the perception that our expertise is centred on heavy and traditional processes – but this is simply not the case, as our signature to the Declaration confirms.

“Our city is at the helm of the sustainable revolution in construction, with the National Brownfield institute (NBI) and best-in-class research from the University of Wolverhampton putting us on the map as a unique centre of excellence for environmental development and regeneration. These strengths form a critical lever for enhancing our economy post-pandemic, opening up opportunities to unlock new investments, create jobs and boost skills training for local people in a sector that is becoming increasingly vital to achieving a Green Industrial Revolution. We are proud that Wolverhampton is a city where building back better isn’t just a promise, but a strategy in action.”

The city is also driving forward the UK Government’s agenda to expedite the delivery of homes built using MMC, as the formal base for the Ministry of Housing, Communities and Local Government’s new MMC Taskforce.

This follows the Department’s earlier decision in February 2021 to house a second ministerial headquarters in Wolverhampton, in acknowledgement of the Black Country’s rising influence in sustainable housebuilding. The city will be the first regional location outside of London to have a regular ministerial presence, creating hundreds of employment opportunities for local people – for which recruitment is currently underway.

To date, thousands of new homes and jobs have been unlocked and accelerated on acres of brownfield sites throughout the region since 2017 when the WMCA was first established. Following the landmark housing deal of 2018, the WMCA has run some of the largest housing and regeneration delivery programmes of any Combined Authority with over half a billion pounds of devolved housing and land funds being used to support the regeneration of previously developed sites across the whole region.

Andy Street, the Mayor of the West Midlands, said: “As we recover from the impact of the pandemic on our economy, it’s important we do so in a way that helps people play their part in tackling climate change and delivers real benefits to their lives.

“That means helping people with their energy bills by ‘retrofitting’ homes to make them more energy efficient and helping businesses and families use energy more efficiently.

“It means using modern methods of construction which are friendlier on the environment, while providing new highly skilled, well paid job opportunities. It means taking advantage of new digital technologies, and training local people with the skills we’ll need to seize these opportunities. And it means helping people access new job opportunities through improved public transport connectivity, helping increase the size of our economy, whilst reducing carbon emissions and our impact on air quality.”

“As part of our region’s plan to achieve carbon neutrality by 2041, the West Midlands Combined Authority is developing a ‘circular economy’ routemap, setting out precisely how we can use energy and resources more efficiently and more effectively to help grow our economy. Wolverhampton City Council’s commitment to this objective, together with that of all the local authorities in the region, demonstrates clearly how much of a team effort meeting our climate objectives and green job aspirations will be. I’m really looking forward to working with the City council to take advantage of the opportunities joining this network will provide not just Wolverhampton, but our whole region.”

Construction is just one sector where the region has particular research and business strengths in the circular economy. Manufacturing and food production have also been selected as priority areas under a new West Midlands Circular Economy Routemap, due for publication later this year.

Developed by the WMCA’s dedicated Circular Economy Taskforce, the Routemap will demonstrate opportunities for innovation, investment and growth across the West Midlands economy.

A number of firms in the region are already leading the way in circular principles. Helping to remove single-use plastics and non-recyclable waste from many critical industries is Birmingham-based plastic technology manufacturer Aquapak Polymers, whose innovative water-soluble polymer, Hydropol, is being made into a wide range of products – from laundry and garment bags, to disposable gloves and food refuse sacks. Hydropol is also being piloted for the construction industry by customers in Queensland, Australia, to create dissolvable cement bags that allows cement to be put directly into concrete mixers without the need to be manually emptied

Also based in the city is West Midlands-founded clean technology startup Aceleron, which is rethinking battery production by designing waste out of the manufacturing process, creating world-first batteries from recycled materials that can be repaired, reused and upgraded, avoiding total replacement.

Alongside moves to be more circular, the region is championing a series of other carbon cutting solutions, notably in transport and energy systems.

Birmingham became the UK’s second city to establish a Clean Air Zone in June 2021 in a bid to improve its air quality. Meanwhile, Coventry is at the forefront of the nation’s large-scale battery production ambitions, with a planning application to establish a 100% green-powered Gigafactory at Coventry Airport in the pipeline, confirming the West Midlands’ competitive appeal to supercharge electric vehicle technologies. 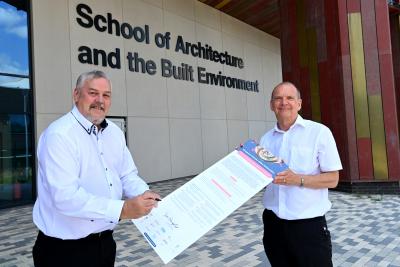