Three young Wulfrunians have been recognised for their community efforts and crowned winners at this year’s Wolverhampton Young Citizen of the Year Award.

The event, devised and sponsored by the city’s Rotary Clubs and hosted by the Mayor of Wolverhampton Councillor Greg Brackenridge on Thursday (16 September), saw 9 community minded young citizens nominated in 2 categories – 13 to 18 years old and 19 to 25 years old.

The age range for the awards was extended this year to bring the local awards in line with the national Rotary awards and to celebrate young people and young adults alike.

As in previous years, the judges had the difficult task of whittling down the shortlist in each category and then choosing a winner in each – a task which proved more difficult than ever before.

As in previous years, the judges had the difficult task of choosing winners. After much deliberation, the 13 to 18 years category was won by Dylan Wright from Pendeford, a Year 11 student and house leader at Codsall Community High School who uses his talents in music and performing arts to inspire others to support their community, as well as volunteering at his local Barnardo’s charity shop.

In the 19 to 25 years old category, the spoils were shared with Lucy Palin and Parwiz Karimi both being crowned winners.

23 year old Lucy won the award for founding and running a local charity called Project GIVE, which aims to eradicate period poverty in Wolverhampton and end the taboo around the subject of periods. It supports thousands of young people by providing sanitary products to schools, community centres and council buildings as well as providing education sessions to school pupils.

Parwiz, who is 24 and lives in Whitmore Reans, founded the Afghan Youth Association to help young people from Afghanistan integrate into the British way of life, bringing people together to work on a shared platform for the betterment of their communities and wider society. The charity also raised over £11,000 in 3 days to fund the education of young women in Afghanistan.

Mayor Councillor Brackenridge said: “These awards are an excellent way of showcasing some of the fantastic things that our city’s young people do for others – and the quality of nominations this year was fantastic.

“The judging panel had an extremely difficult time deciding on the winners of the award and eventually had to settle for 3 winners across the 2 categories, instead of 2.

“This is testament to the hard work and community efforts of all the nominees, and everybody who attended the ceremony should be extremely proud of what they have achieved.

“It makes me very proud to hear some of the great things these youngsters have done – and it tells me for certain that our city has got an extremely bright future.”

The awards are spearheaded by the city’s Rotary Clubs alongside the City of Wolverhampton Council, Wolverhampton Wanderers Foundation, Express and Star, The Way Youth Zone, Carvers Building Supplies Ltd and Wednesfield Magazine and celebrate 13 to 25 year olds who live, learn or work in the city and have gone the extra mile to help other people or organisations. For more information, please visit Young Citizen of the Year Awards. 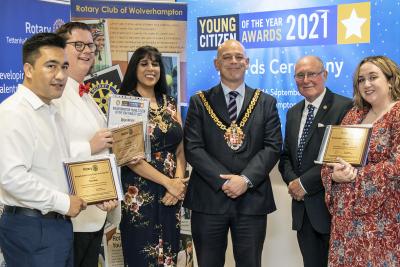 Left to right, Parwiz Karimi, Dylan Wright, the Mayoress and Mayor of Wolverhampton Sureena Brackenridge and Councillor Greg Brackenridge, Rotarian and Chairman of the Awards Roger Timbrell, and Lucy Palin