The West Midlands today (Tuesday 18 October) announced its formal submission to Government for a package of Investment Zones capable of accelerating economic growth and delivering tens of thousands of new homes and jobs.

If accepted by Government, the zones have the potential to boost the regional economy by more than £4.7 billion a year, creating 65,128 new jobs, 18,616 new homes and 3.1m sqm of commercial space.

In a comprehensive case, the region’s political and business leaders said their Investment Zone proposals would help regenerate and lift up some of the more deprived areas of the West Midlands.

The bid emphasises how the zones offer an opportunity to unlock new public and private investment to help rebalance the economy and tackle long standing issues around deprivation, fuel poverty, jobs, skills and health – goals that are central to the region’s on-going devolution discussions with Government.

The zones would offer tax breaks and other incentives to make it easier, quicker and cheaper for the private sector to do business, helping to attract significant inward investment.

But the submission has stressed that the economic growth offered by the zones should not be at the expense of the region’s overarching mission to build a fairer, greener and better connected West Midlands or its #WM2041 ambition to reach net zero within the next 2 decades.

The region’s case to Government, which is expected to make a decision on the proposals in the weeks ahead, has been jointly developed by the WMCA, local councils and business leaders. It concentrates Investment Zone sites in key locations and along major economic corridors.

A critical element of the region’s bid is to make sure the unlocking of public sector investment attracts and accelerates substantial new private sector investment, bringing wider benefits for local communities.

Andy Street, Mayor of the West Midlands and chair of the WMCA, said: “Investment Zones have the potential to supercharge economic growth in our region and so I’m really pleased that, in close collaboration with our local authority partners, we’ve been able to submit such a strong array of options to Government.

“Having been involved in establishing one of the UK’s most successful enterprise zones in and around Centenary Square in Birmingham, I have seen first hand the power these special economic areas can have with the ability to bring about genuinely transformational change and investment.

“Most importantly we know that Investment Zones can accelerate the delivery of tangible outcomes for local residents – including boosting employment prospects - and so I’m looking forward to working with ministers to get our West Midlands zones established ASAP.

“Alongside the Trailblazer Devolution Deal which we continue to negotiate with Government, these are truly exciting times for the West Midlands.”

Councillor Mike Bird, WMCA portfolio holder for housing and land and leader of Walsall Council, added: “The WMCA has worked closely and extensively with local authorities and other partners in recent weeks to draw up this formal bid which clearly sets out where we think the biggest impact can be had from these Investment Zone sites.

“Our submission puts a huge focus on attracting substantial private sector investment by creating the conditions that will give business the long term certainty and stability needed to invest.

“This, in turn, will speed up the delivery of thousands of the new homes and decent jobs that local people so badly need while building a future looking economy that benefits all parts of society and the fight against climate change.”

Many of the locations put forward in the West Midlands submission build on the opportunities offered by the HS2 high speed rail line.

They also reflect the signalling by Government of its intention to fast track several key transport schemes including the Wednesbury to Brierley Hill Metro tram extension, enhanced transport solutions for the East Birmingham to North Solihull corridor, the new Aldridge railway station and links to the new train stations at Willenhall and Darlaston.

This separate and additional investment in transport infrastructure will help provide the Investment Zones with the improved connectivity they need.

The submission builds on the regeneration work already underway in the region and aims to replicate and exceed the achievements of projects such as the UK’s most successful enterprise zone which was set up in Birmingham city centre in 2014. That was instrumental in driving the transformation of the city centre and in particular the redevelopment of Paradise Circus.

Rob Groves, regional development director of MEPC Limited, development and asset managers of the Paradise Birmingham scheme, said: “The impact of the enterprise zone status for our Paradise scheme in the centre of Birmingham was hugely significant in being able to bring this complex scheme forward and allow us to generate the momentum to deliver this truly transformational scheme for the city and region.

“It unlocked the scheme by providing the much needed investment to make the major infrastructure changes required to deliver the vision for this once in a generation opportunity.  Paradise is a real illustration of the success that can be achieved with the type of public/private partnerships set out in these new Investment Zones and the wider benefits they can bring.”

In their submission, the West Midlands metropolitan councils have stressed to Government that the introduction of Investment Zones must not be to the detriment of the financial resources that would have otherwise been available to them and the WMCA.

They said the implementation of the zones would need to be subject to further work in respect to due diligence, assessments of financial risk and approval through the appropriate Governance structures.

Councillor Brigid Jones, Deputy Leader of Birmingham City Council and WMCA portfolio holder for levelling up, said: “The East Birmingham North Solihull area offers a large scale opportunity to drive growth and level up. The sites we’ve put forward would maximise the economic benefit of HS2 and unlock significant investment. They sit within a wider strategy to address transport connectivity and to improve public services. We seek to bring jobs and opportunities to an area that has the largest concentration of deprivation outside London and very high levels of unemployment and people disconnected from the labour market.

“We bring a strong track record of success delivering major developments and projects. The Birmingham City Centre Enterprise Zone and its Business Improvement Districts have transformed the centre of the city and are delivering flagship investments including Paradise and we delivered an extraordinarily successful and uplifting Commonwealth Games, under budget and in half the usual time.”

City of Wolverhampton Council leader and WMCA portfolio lead for economy and innovation, Councillor Ian Brookfield, said: “We are a bold and ambitious city with a track record of delivery. The city council, working with public and private sector partners, makes a real difference to residents and businesses.

“As revealed in the Wolverhampton Investment Prospectus, launched earlier this year, we have established plans and investment opportunities we are confident fit the criteria for Investment Zone status.

“The Wolverhampton proposal is centred around the Green Innovation Corridor that will build on the city’s key assets in skills, research and high end manufacturing to level up the city’s economy and support business growth and jobs.

“Overall, externally verified economic data tells us a Wolverhampton Investment Zone could, over 10 years, generate 5,947 jobs and add more than £1.5 billion GVA to the city economy.”

Leader of Coventry City Council, Councillor George Duggins, said: “The West Midlands Gigafactory project, and its immediate area, is a once in a generation opportunity to supercharge UK growth, as well as protect and create tens of thousands of jobs in the automotive and energy storage sectors.

“We have formed a strong partnership to deliver a Gigafactory in Coventry and we have the track record that proves what we can do in the UK Battery Industrialisation Centre adjacent to the gigafactory site.

“By granting Investment Zone status to this existing site, with planning permission attached, it means here in Coventry this is not about ploughing up new areas for speculative investments.  It also means Ministers can continue to demonstrate their backing for Coventry and wider West Midlands’ world leading automotive sector, with intelligent incentives helping to attract a £2.5 billion gigafactory investment and create 6,000 new jobs directly.”

Councillor Patrick Harley, leader of Dudley Council, said: “We very much welcome the opportunity to invest in 4 important areas in Dudley along the new Midland Metro extension to Brierley Hill. It will enable businesses investing in the zones to benefit financially through lower taxes, as well as accelerating development and helping to bring forward a mix of commercial and residential developments in these key areas and make the most of this important transport link.”

“However, we want to grow more, which is why I fully support the submission of an expression of interest to Government for a Sandwell Investment Zone along the route of the new Metro extension currently under construction from Wednesbury through Great Bridge, Dudley Port and Tipton.

“We are pleased to have the support of Shaun Bailey MP for this proposal. I hope that the Government will also back our plans so that businesses and residents can benefit from the additional opportunities for growth that Investment Zone status could offer over a 10 year period.”

Councillor Ian Courts, leader of Solihull Council: said: “Across the region, and specifically here in Solihull, we have a range of exciting locations perfectly primed and positioned to help drive the vital economic growth, jobs and housing we all want to see. Investment Zone status could be the key we need to finally start unlocking some of this awesome local potential.

“A perfect example of this is our Arden Cross site, and the adjacent Hub area in Solihull. Once delivered, the globally connected Arden Cross will help the Midlands and the entire country compete on the international stage by increasing the amount of high value products, jobs and skills we create and share with the world.

“We already have a detailed masterplan for the area and I’m confident this would provide a healthy return on investment for Solihull, the region and the UK. The efficient development of this site will also help relieve the pressure on other areas of our green belt in Solihull.  Making Arden Cross an Investment Zone could speed up and enhance our ambitious vision for this site.”

Councillor Adrian Andrew, deputy leader of Walsall Council said: “We already have overarching visions and objectives set out in the Walsall Town Centre Masterplan and the Willenhall Framework Plan. New investment, coupled with the new railway stations in Willenhall and Darlaston, will accelerate housing and economic growth opportunities and help us to deliver on our ambitions for the borough.”

Councillor Andrew Day, leader of Warwick District Council, said: “This breakthrough offer from Government will create a favourable climate to secure the £3.4 billion in finance to deliver the West Midlands Gigafactory.

“This vital new facility will anchor our important automotive and future mobility supply chain, which already supports 50,000 research, development, and manufacturing jobs locally, as well many more jobs across the region.  I welcome this bold initiative, which is just what we need to foster the right environment for step change investment, making a significant contribution to our shared vision for a net zero carbon future.” 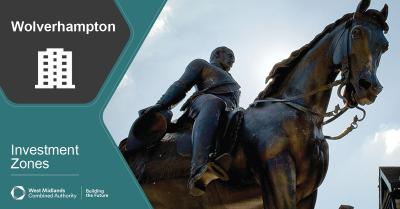