Car parks in Wednesfield are to be named in honour of two well-loved local residents under a community-led approach to celebrating their lives and contributions to the village.

City of Wolverhampton Council-owned car parks off Woodhouse Fold are to be named after Steph Clarke, a community activist and photographer, and William “Harry” Busby, a Second World War veteran.

A third, also off Woodhouse Fold, will become known as Battle of Wodensfield to recognise the history of the area.

Permission to name the car parks, which had previously been referred to simply by their location, was granted by the council and signage will be unveiled during a special service in the village on Sunday(17th) from 11am.

The car park closest to Bealeys Fold will be named after Steph Clarke. Steph was a community activist and photographer who ran the local Wednesfield news site WV11.co.uk with her husband James, covering community stories and events.

Before her death in 2016, she worked very closely with the Hands on Wednesfield volunteer group and was well known by members of the Wednesfield community for her commitment to the village.

The old market car park is to be named after Second World War veteran William “Harry” Busby, who served in the Royal Navy as a torpedoman aboard HMS Keppel. He took part in daring convoys to Russia and Canada and earned an array of medals for his bravery.

Following the war, Harry became a policeman then a water treatment engineer. The dedicated Wolves fan lived with his wife Irene in Wednesfield for many years and was known to many local residents for his jokes and smiles.

The third car park, at the top end of Neachells Lane, has been named Battle of Wodensfield to commemorate one of the country’s most significant battles.

Research by the Wednesfield History Society found that the Battle of Wodensfield saw Edward the Elder with the aid of his sister Aethelflaed, Lady of the Mercians, and their allies, defeat the Danes of Northumbria at what is modern day Wednesfield on 5th of August 910 AD.

Jay Baso, chair of Wednesfield Village Business Alliance, said: “This has been a real community project, with businesses, residents, traders and local community volunteers involved from the very start to help identify suitable names for the car parks. We are all here to work with each other for the good of Wednesfield.

“We’re really pleased that the council gave permission to name the car parks after people who have meant so much to the village. We think it’s the first time this has been done in the city and it will be a pleasure to work with the council in the future with money secured under the second phase of the Towns Fund.

“Visitors to Wednesfield will now be able to read more about Steph and Harry and find out why they were so valued by local people. They’ll also be getting a bit of a history lesson thanks to the recognition of the Battle of Wodensfield – a really significant date in our village’s past. I’d like to thank the Wednesfield History Society, particularly Ray Fellows and Simon Hamilton, for all the work they have done for bringing the history of Wednesfield, our village, back to life.”

Councillor Steve Evans, City of Wolverhampton’s cabinet member for city environment and climate change, said: “I would like to thank everyone in the local community who has worked on this project. Steph and Harry will have been known to many people and this recognition is a fitting tribute to them both.

“This naming is part of a range of improvement works, including upgrading security cameras at the three car park sites. Funding for this work was secured by Wolverhampton’s Towns Fund Board, from the £1million Government Towns Fund Accelerator Grant.

“We’re proud to be working so closely with Jay Baso and the local community on this and other projects in the village. It’s the local people who give so much of their time that make Wednesfield village such a great place to live, work and visit.” 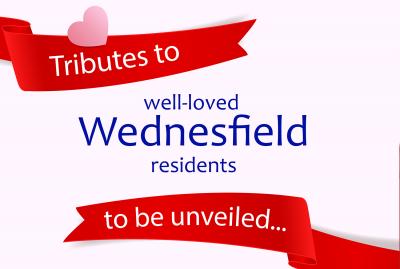