Trading Standards officers seized a large haul of illicit cigarettes, different varieties of tobacco, disposable vapes and an extendable truncheon during the raid at a city premises.

Action will now be taken against the owners of the premises where the material was seized while further investigations will be carried out to identify their suppliers.

A specially trained tobacco detection dog was used to detect the illicit products which were found in a hidden room behind stacked boxes and shelving.

The operation last week yielded around 110,000 illicit cigarettes, with the majority believed to be counterfeit.

A further 63 disposable vapes were found with oversized tanks and incorrect warnings along with further substances believed to be shisha tobacco. These substances were not labelled and will go for testing.

An extendable truncheon was also discovered and seized by the police under Offensive Weapons legislation.

Trading Standards officers were joined by representatives from West Midlands Police during the operation.

John Roseblade, director for housing and city environment at City of Wolverhampton Council, said: “Our Trading Standards officers carry out operations such as this to help protect the public from dangerous products, as well as to protect our legitimate businesses.

“Counterfeit cigarettes pose even greater health risks than legitimate ones as they often contain far more nicotine. In addition, fake products have been found to contain high levels of lead and arsenic.

“Importantly, legal cigarettes are manufactured to meet safety requirements, which reduce the chance that they could set fire to sofas, beds and other combustible materials. Illegal cigarettes are not self-extinguishable and have been attributed to a number of house fires and deaths.”

Once investigations have been completed, the illegal cigarettes and tobacco will be handed over to a recycling scheme to be dealt with in an environmentally friendly way.

Anyone who thinks they may have been sold illegal goods or suspect someone is selling them, can email trading.standards@wolverhampton.gov.uk or visit Citizens Advice.

Tobacco detection dog Yoyo who sniffed out the hidden haul 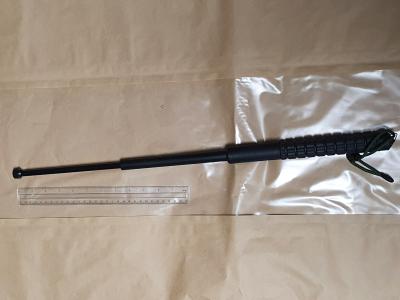 The extendable truncheon discovered during the raid