Wolverhampton is celebrating the Queen’s Platinum Jubilee by officially dedicating tens of thousands of trees which have been planted across the city to the Queen’s Green Canopy (QGC).

More than 30,000 new trees planted in Wolverhampton last winter will form part of the canopy, a UK wide tree planting initiative to mark the special year.

Not only will the planting celebrate Her Majesty’s special year, but it will also bring a number of health, well-being and environmental benefits to the city for generations to come.

The trees, made up of native species such as English oak, hawthorn, crab apple, silver birch and hazel, were planted during the winter at locations across the city to improve biodiversity as well as the tree canopy cover.

There are 20 locations where the QGC plaques are being installed including Moseley Road, Bilston, Colman Avenue, Wednesfield, Stowheath Lane, Bee Lane and Spring Vale Park.

The plans received a boost from conservation charity the Woodland Trust after the council secured almost £130,000 last year to carry out much of the planting which is being commemorated.

Mayor of Wolverhampton, Councillor Sandra Samuels OBE, said: “The Queen’s Platinum Jubilee is a very special occasion and one that we are delighted to mark here in the city in such an innovative way.

“It is fitting that we mark Her Majesty’s 70 years of service with such a long lasting legacy.”

Councillor Steve Evans, Cabinet Member for City Environment and Climate Change, added: “Following a public consultation last year we were able to identify locations for new planting, making sure many areas where we had less tree cover were able to be included in the canopy.

“Every area of trees we have planted will bring a range of benefits for our residents, local wildlife and our climate for both now and for the future.”

Other ways in which the council is marking Her Majesty’s Platinum Jubilee include waiving fees for road closures for residents to hold street parties and lighting a beacon outside St Peter’s Church tomorrow (Thursday) at 9pm.
Events at local libraries include included the Big Jubilee Read, themed events for children and memorabilia displays. There was also a special Jubilee afternoon tea at Wolverhampton Art Gallery last week.
For more information on the Platinum Jubilee and events in the city, please visit The Queen's Platinum Jubilee 2022. 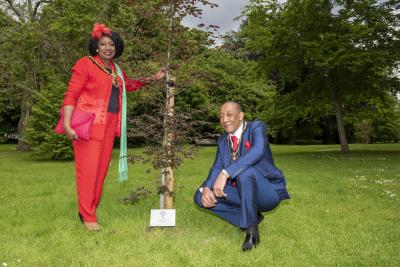 The Mayor of Wolverhampton, Councillor Sandra Samuels OBE, visited Bantock Park with her consort, husband Karl Samuels, to officially dedicate one of the thousands of new trees planted for the Queen’s Green Canopy (QGC)