Taxi drivers from across Wolverhampton have bid a fond farewell to a council officer dubbed “the queen of licensing” who is retiring at the age of 75 after nearly 40 years’ service.

Drivers gathered outside the Civic Centre, alongside council colleagues, to surprise Elaine Moreton by singing happy birthday as she turned 75 and presenting her with cards, gifts and flowers.

Elaine is a section leader in the taxi licensing team and has ensured that taxi drivers have stuck to the rules for the past 31 years.

While that has meant that from time to time she had to get tough, taxi drivers proved there were no hard feelings by gathering to wish Elaine a happy retirement.

Parminder Sekhon, chairman of the Wolverhampton Taxi Owners Association, said: “I’ve known her for 22 years, but other drivers have known her a lot longer – ever since she started. She’ll be missed, she was always there and on the end of the phone, I’ve called her out of hours when I’ve needed to.

“I saw her after midnight the other weekend when I dropped a fare off near her house and she was there sitting in her front window waving at me - even late on a Saturday night she’s still watching what the taxis are up to.

“She was the face of licensing as far as the drivers are concerned.”

Elaine leaves the council tomorrow (Friday 29 October) after starting work as a 16 year old administration assistant in the then Town Clerk’s department in 1963.

After getting married in 1971, she moved to Wales to raise her 2 children before returning to Wolverhampton and the council’s licensing department in 1990 where she has remained ever since.

Elaine said she will miss her colleagues, many of whom she considers friends, especially those that she has mentored, watched grow up and progress their careers.

She added, “I know I could’ve retired a long time ago, but age is just a number and I’ve loved my job. I’ve never been able to sit around – I’ve always got to have something to do which is why I think I’ve held off from retiring for so long.”

Her manager, Greg Bickerdike, said: “She is the queen of licensing. Elaine is a legend both in and out of the council. She strikes fear in the heart of many a taxi driver, but we all know she’s a big softie at heart, uncompromising in doing what’s right and delivering the very best customer service.

“Elaine will be sorely missed and is quite literally irreplaceable. We all wish her the very best for her retirement, she has most certainly earnt it.”

Councillor Philip Page, chairman of the council's regulatory committee, said: “I would like to thank Elaine for many years of service and I hope she has a very happy enjoyable retirement full of many adventures”. 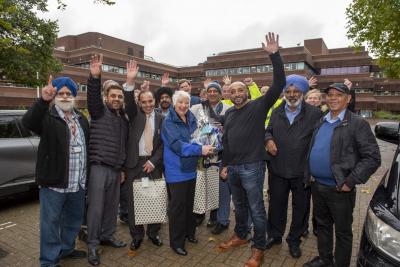