Success! City Council drive away with over a tonne of fly tipped waste and fourth vehicle seized

City of Wolverhampton Council carried out a ‘Day of Action’ to clean-up Wolverhampton’s All Saints area which led to an unexpected seizure of a fourth vehicle wanted for fly tipping.

Yesterday, (February 27) the City Council and ASAN (All Saints Action Network) teamed-up to tackle a wide range of issues including waste, highway and community concerns.

The team removed over one tonne of fly tipped waste and collected 30 bin bags consisting of dropped litter from the streets in the All Saints area.

Council officers and ward councillors were also talking to residents about their concerns, informing them what can and cannot go in their bins and speaking about fly tipping issues.

Residents also got stuck-in the ‘Day of Action’ to improve their community and take pride in keeping their street neat.

Councillor Steve Evans, Cabinet Member for City Environment at City of Wolverhampton Council said: “It’s fantastic to see local residents getting involved in keeping their streets clean and tidy for their community.

“Our Days of Action are not just about litter picking – they are about education and awareness, talking about residents’ concerns to enable us to work together to tackle the behaviour right at the source.

"I applaud the efforts of ASAN, community volunteers and ward Councillors Zee Russell and Beverly Momenabadi for their efforts and action to tackle these issues.”

Shobha Asar-Paul Chief Officer at ASAN said: “Our local area really should be clear of waste, so families and children can feel safe and comfortable in the community.

“It’s great to have local residents and ward councillors working together to help keep All Saints clean.”

During the clean-up, council officers spotted a vehicle reported to have been used in several fly tipping incidents in Drayton Street, Wolverhampton. The team seized the Volkswagen on-the-spot following their latest approach to clamp down on fly tippers.

Councillor Evans added: “This is the fourth car this year that has been taken off the streets for illegal and irresponsible fly tipping.

“We are serious about clamping down on fly tippers. The message couldn’t be more simple - pay the fine or get your car seized.” 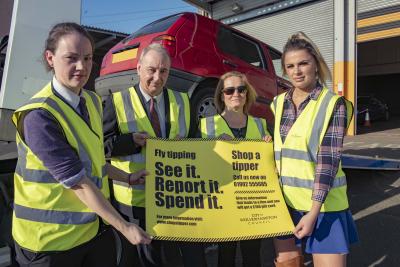