Still time to shape strategy to stop violence against females

There is still time for people to have their say on a refreshed strategy to prevent violence against women and girls.

The three-year plan, developed by the Safer Wolverhampton Partnership, builds upon the significant achievements of previous incarnations which have led to marked improvements in policy, partnership working and practice in order to safeguard and reduce risk to individuals.

The draft Violence Against Women and Girls Strategy 2019-22 can be found at https://bit.ly/2SVwBa0. People can have their say by visiting https://www.surveymonkey.co.uk/r/TWMBM5Q and completing a short survey, or they can email feedback to safer@wolverhampton.gov.uk. The closing date for comments is Tuesday 12 March.

The strategy, like its national counterpart, acknowledges that, while the majority of victims are female, there are both male and female victims and it therefore encompasses work not only around women and girls, but also men and boys.

Mark Taylor, Chair of the Safer Wolverhampton Partnership, said: “Organisations in Wolverhampton are making good progress in tackling violence against women and girls, particularly around prevention, service provision, protection and justice, and performance and governance.

“These strands remain the cornerstones of the new strategy, along with the importance of effective partnership working and engagement with our communities.

"This consultation is a key opportunity for people to help influence how services to prevent violence against women and girls will be delivered over the next few years, and I would urge everyone to have their say."

Councillor Hazel Malcolm, the City of Wolverhampton Council’s Cabinet Member for Public Health and Wellbeing, said: “Organisations in Wolverhampton are working hard to improve the help and support available for victims of gender-based violence, but there is always more to do.

“Research suggests that incidents of domestic and sexual violence, forced marriage, so-called ‘honour-based’ violence and female genital mutilation are still under-reported; through this strategy, we want to raise awareness of the issues, encourage individuals and communities to report cases to the authorities and further improve services available to them."

The issue of violence against women and girls is highlighted by the Orange Wolverhampton campaign, which takes place annually between 25 November, International Day for the Elimination of Violence Against Women and Girls, and 10 December, UN Human Rights Day. For more information, please visit www.orangewolves.net. 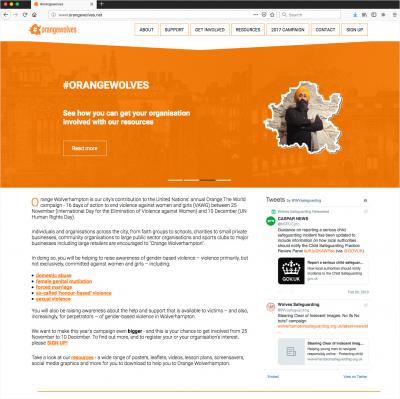