The artillery shell fired during the historic unveiling of Wolverhampton’s Saragarhi Monument has been presented to the Gurdwara that commissioned the statue during a special commemoration evening.

Members of the British Army paid an official visit to Wednesfield’s Guru Nanak Gurdwara to meet members of the local community and speak about the importance of the statue.

The Saragarhi Monument, which stands in Well Lane close to the Gurdwara, is the first UK memorial of its kind commemorating the bravery of 19th century Sikh soldiers.

It was officially unveiled on 12 September, 2021 and the ceremony included a single canon shot to honour the Sikh soldiers who died in the conflict.

The artillery shell fired in the ceremony was presented to the Guru Nanak Gurdwara by Brigadier John Kendall and colleagues from the British Army during the visit.

Brigadier Kendall also gave a presentation to members of the Gurdwara and the local community about the importance of the statue and provided further history about the Battle of Saragarhi, including how the conflict would have been from a soldier’s point of view.

Representatives from the Royal Air Force and Royal Navy were also in attendance during the evening as part of their community engagement programmes.

Members of the Gurdwara’s congregation undertook a massive £100,000 fundraising programme for the Saragarhi Monument, which was created by Black Country sculptor Luke Perry.

The project was supported by the community and City of Wolverhampton Council also contributed £35,000 towards the memorial after it agreed to transfer land to the Gurdwara on a 99 year lease.

The battle centred on an outpost in Saragarhi which was surrounded and attacked by the tribesmen. The 21 soldiers inside the outpost, led by Havildar Ishar Singh, chose to fight to the death rather than surrender. A further man, Khuda Dhad, believed to be a Muslim cook and handyman who was not enrolled as a solider but was employed by the British Army, also died after choosing to join the battle to defend the outpost.

Councillor Bhupinder Gakhal, Cabinet Member for City Assets and Housing at City of Wolverhampton Council and ward member for Wednesfield South, worked closely with the Gurdwara to develop plans for the memorial.

He said: “This was an important visit to recognise and remember the Battle of Saragarhi. The Gurdwara was honoured to have welcomed representatives from the British Army, the Royal Air Force and the Royal Navy and receive this special presentation.

“The Saragarhi Monument forms part of British Army history and it is only right that we remember the 21 Sikh soldiers and the Muslim cook who joined their ranks for their incredible bravery.

“I would encourage people to come to Wednesfield to see the monument and learn more about the brotherhood and sense of loyalty shared by those men who fought to the end.” 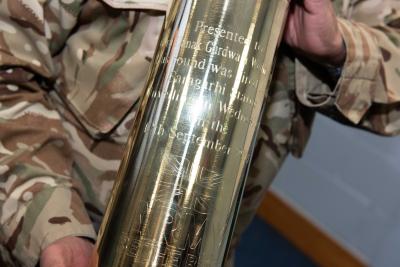