A concerned 6 year old school boy from Wolverhampton has clamped down on fly tippers dumping rubbish outside his primary school.

Elliott Less, from Trinity Church of England Primary School, came home upset about some ‘nasty and smelly’ rubbish dumped outside his school.

Elliott raised his concerns to his grandad about how parents with pushchairs couldn’t get down the street, due to the amount of rubbish.

He sat with his grandad and wrote an email to City of Wolverhampton Council to report the issue.

In the email, Elliott wrote: “Hi, I go to my school Trinity Church of England school and some nasty person has tipped a lot of rubbish on the footpath, on the top and bottom of the path it's really nasty and smells. All of the children have to walk past it, my friends’ moms cannot get her pushchairs past as it blocks most of the path. Could you please ask someone to clean it up? Thank you. Elliott Less, age 6.”

The City Council cleared the fly tipping and officers visited the school to thank Elliott in person, for supporting their anti littering campaign.

During their visit, council officers organised a litter pick of the school grounds along with Elliott and his classmates.

The children got to learn all about what happens to litter when it’s dropped, who cleans the city’s streets, the importance of recycling and why we should encourage others to put litter in the bin.

Elliott and his classmates were awarded with ‘Litter Hero’ certificates to thank them for helping to keep their school grounds clean.

Councillor Steve Evans, Cabinet Member for City Environment at City of Wolverhampton Council said: “It was a pleasure to meet Elliott and his classmates and fantastic to hear about how much they are learning about anti-littering and recycling.

“When I first heard a young child had reported fly tipping outside his school, I couldn’t believe it.

“If only the people responsible for these careless and criminal acts cared about the environment as much as a 6 year old boy, Wolverhampton would be a cleaner city.

“I would like to thank Elliott for standing up for his school and reporting the fly tipping to the council and I strongly encourage others to report those responsible.”

The story follows the City Council’s ‘Shop a tipper’ campaign to clamp down on fly tippers across the city. To find out more about the campaign visit Shop a Tipper. 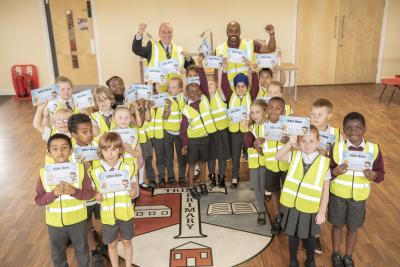 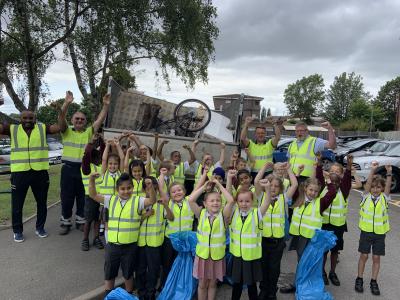 Pupils from Trinity Church of England Primary School with team members from the council’s Environmental Services and Public Protection team. (Elliott, standing on the far right)