The charter, which is given to schools who demonstrate their commitment to preventing and dealing with bullying among young people, was presented to schools at a prestigious event in the Mayoral Suite at the Civic Centre yesterday (Wednesday 12 June, 2019).

Schools were asked to submit evidence and policies to support an application for a charter award based on statements in the charter, which was then examined by the B-Safe team who selected the schools which deserved to be awarded charter status.

Councillor John Reynolds, the City of Wolverhampton Council’s Cabinet Member for Children and Young People, said: “I believe it is absolutely key that schools in the city who show their commitment towards the prevention of bullying are recognised for the hard work that they put in daily.

“Bullying affects many people, especially in schools, so it is important pupils are educated on how to prevent it and deal with it should it possibly occur.”

The B-Safe Team is supported by HeadStart Wolverhampton and reports directly to Wolverhampton Safeguarding Children Board. It aims to make sure that the views and experiences of children and young people are heard, to challenge the work of the Board and its partners and influence the Board’s priorities. It also works to improve the way that the wellbeing of children and young people is promoted, and that they are protected from abuse and neglect.

Linda Sanders, Chair of Wolverhampton’s Safeguarding Board, said: “I’d like to thank the B-Safe team for developing this charter.

“Their hard work is helping to raise awareness of the terrible impact that bullying can have on children and young people, and the steps that people and schools can take to help end bullying for good.”

HeadStart Wolverhampton, part of a £56 million National Lottery funded programme set-up by the National Lottery Community Fund, is designed to improve the emotional mental health and wellbeing of children and young people aged 10 to 16 by giving them the skills they need to cope with the challenges of modern life.

Citywide help is available through the HeadStart Wolverhampton Support and Guidance Directory which provides emotional mental health and wellbeing resources from different organisations, including information targeted at young people, parents and carers, and professionals. 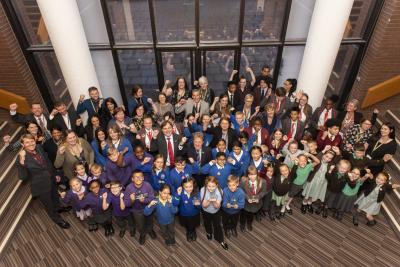