This year’s Remembrance Sunday in Wolverhampton sees the return of a full military parade through the city centre to commemorate the fallen for the first time since 2019.

More than 200 veterans, serving forces personnel, cadets and other uniformed services are due to take part in the parade which steps off at 10.30am from Wulfruna Street into Princes Square then Lichfield Street, Queen Square and into Exchange Street, across Cheapside and on to St Peter's Square for the annual Observance of Remembrance.

They will be led by the Royal Air Force Cosford Pipe Band.

People are encouraged to line the route in time for the parade starting at 10.30am; there will also be space around the perimeter of St Peter's Square to observe the service.

Mayor of Wolverhampton, Councillor Sandra Samuels OBE, said: "Bringing back the full city centre Remembrance Sunday parade for the first time since 2019 is something I was very keen to do, and I know it is something our veterans and forces community wanted as well.

"I know the people of Wolverhampton, who enjoy such a longstanding close and special bond with the forces community, will turn out in their thousands to pay their respects to the fallen. We would encourage people to line the route and come and watch the outdoor drumhead service in St Peter's Square.

"The event will have extra poignancy this year with war raging in Europe and coming soon after the death of our late Queen Elizabeth II to whom our forces swore allegiance for so many years. Remembrance is a time to honour the fallen, pray for peace and remind ourselves of the terrible human cost of war and conflict."

Please note that there will be some slight disruption to transport this Sunday, with Wulfruna Street closed to traffic between 8.30am to 11am. The parade route is closed to all traffic from 10.30am to allow the parade to safely march and will reopen at approximately 10.50am.

Members of the public are also advised that the Civic Centre underground car park will not be open on the day due to road closures and visitors are asked to make use of public transport or other car parks.

Meanwhile, a service organised by the Royal British Legion will also take place at the cenotaph in St Peter’s Square to mark Armistice Day on Friday (11 November).

On Saturday (12 November), the city will welcome a contingent from Princess Irene Brigade from the Netherlands who come to the city each year to remember their fallen comrades from the Second World War. They will take part in a service of remembrance at the war graves in Jeffcock Road Cemetery, Pennfields, joined by the Mayor and other dignitaries at 10am. 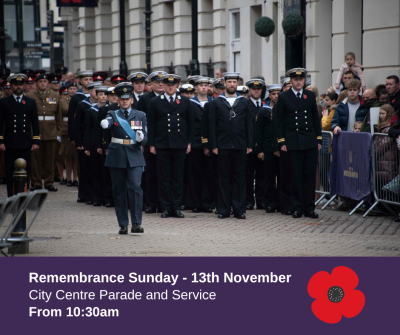