Recycling is no tall order for pupils at St Anthony’s

Young eco warriors from St Anthony's Catholic Primary School in Wolverhampton have been investigating the importance of recycling - with a little help from a friendly giraffe.

They have temporarily adopted the mesh giraffe for a challenge set by the British Ironwork Centre in Oswestry to collect recyclable bottle tops.

The children have been given 4 weeks to fill the giraffe with plastic and metal bottle tops as many times as they can, which they can then use afterwards to create their own work of art or something useful and innovative for the community.

Headteacher Tamsin Davis said: "Children across all ages have loved having the giraffe here and it has generated discussion with our visitors about the wider projects we are involved in to save the planet. The children were so happy to see that the giraffe even matched our school colours!

"The bottle tops have been flying in and we are now on our third round of filling the giraffe. Our Eco Warriors have been in charge of the project and they hope to use the bottle tops to create an amazing piece of artwork which reflects their motto, 'Be Fantastic, Use Less Plastic'."

The British Ironwork Centre created 6 giraffes which have been distributed to schools around the country. Each school has their giraffe for a month, during which time they are encouraged to fill it with metal and plastic bottle tops. Once completed, pupils are tasked with using the recycled bottle tops to create something of use for their school or community, such as an art project or footpath.

Councillor Dr Michael Hardacre, the City of Wolverhampton Council's Cabinet Member for Education and Skills, said: "It's hugely important that schools teach our children about the importance of recycling and how each of us has a role to play in protecting our planet, and what better way to do it than through a fun and engaging project like this one?

“It’s great that the children at St Anthony’s have proved that recycling needn’t be a tall order.”

Clive Knowles, from the British Ironwork Centre, said: "This free project has been specifically designed to help educate children about the importance of protecting our planet whilst inspiring them to think both innovatively and creatively to make important environmental changes. It aims to show children that waste can be a valuable resource in creating useful products and that recycling can be extremely rewarding.

"The school which collects the most bottle tops and the school which creates the most innovative project will be rewarded with a unique and specially designed trophy to celebrate their efforts, while children who showcase innovation and large collection numbers will also receive a special certificate to thank them for all of their hard work."

Every year, the British Ironwork Centre – which also created the Knife Angel which is coming to Wolverhampton in April – initiates a number of projects specifically designed to tackle social and environmental issues. The centre involves schools and young people in many of these projects, often encouraging them to use their creativity. For further details, please visit British Ironwork Centre. 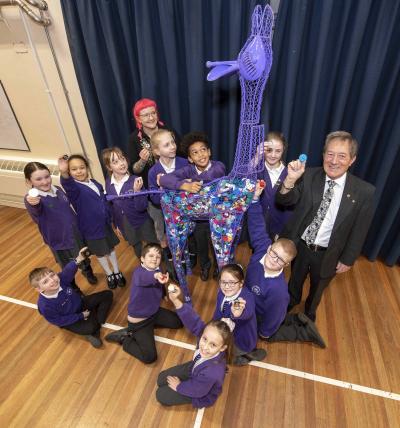