The young winners of a Fairtrade arts competition received their prizes from the Mayor of Wolverhampton at a special ceremony recently.

All Wolverhampton schools which put a focus on Fairtrade in their curriculum were invited to enter the annual competition, organised by Ann Bickley and the Wolverhampton City Fairtrade Partnership and sponsored by The Rotary Club of Wolverhampton.

Pupils were asked to design posters highlighting the theme for this year's Fairtrade Fortnight, 'She Deserves Fairtrade’, which calls for women cocoa farmers in Africa to earn a living income.

Children from schools from across the city submitted entries with a total of 12 winners and runners up selected by judges. The posters will go on display in a Co-operative store in the city at a later date.

They received a selection of prizes including book tokens, Fairtrade Easter eggs and goody bags for their schools from the Mayor of Wolverhampton, Councillor Claire Darke, at a ceremony on Friday (6 March 2020).

Mayor Councillor Darke said: “It’s great to see so many of our city’s schools participating in Fairtrade activities such as this.

“Fairtrade offers us all a practical way to help make a difference to the lives of the people who grow the things we love.

“By switching to Fairtrade products we can help people to earn their way out of poverty and build a better life for themselves and their families.”

Barbara Gwinnett, Chair of Wolverhampton City Fairtrade Partnership, added: "We received some excellent entries for this year's competition, and we had a hard time picking the winners and the runners up. I'd like to congratulate everyone who took part and thank them for helping to raise awareness of Fairtrade in Wolverhampton."

The competition was one of this year's Fairtrade Fortnight activities in Wolverhampton, which also included a fast fashion show in the Mander Centre highlighting ethical clothing. 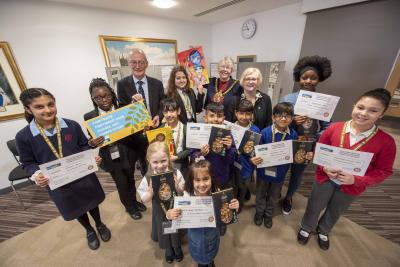