The young winners of a Fairtrade arts competition received their prizes from the Mayor of Wolverhampton at a special ceremony.

Pupils were asked to design posters highlighting the theme for this year's Fairtrade Fortnight, 'Living Income and Cocoa'. Children from seven primary schools from across the city submitted entries with a total of 14 winners and runners-up selected by judges. The posters will go on display in a Co-operative store in the city at a later date.

They received a selection of prizes including book tokens, Fairtrade Easter eggs and goody bags for their schools from the Mayor of Wolverhampton Councillor Phil Page.

He said: "This year's Fairtrade Fortnight highlighted a very important issue. Chocolate is one of our favourite treats but the cocoa industry is under severe pressure from climate change and the exploitation of farmers, who are underpaid and do not have enough for food, education and housing.

“Fairtrade is working to redress the balance and the children are helping to make people aware of this issue with their great posters."

Barbara Gwinnett, Chair of Wolverhampton City Fairtrade Partnership, said: "We received some excellent entries for this year's competition and we had a hard time picking the winners and the runners up. I'd like to congratulate everyone who took part and thank them for helping to raise awareness of Fairtrade in Wolverhampton."

The competition was one of the highlights of this year's Fairtrade Fortnight activities in Wolverhampton, which also included the annual Fairtrade faith service for school pupils. 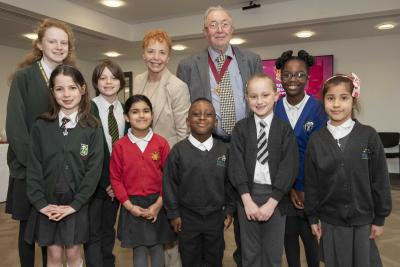 The Mayor and Mayoress of Wolverhampton, Councillor Phil Page and Elaine Hadley-Howell, with some of the winners of the schools’ Fairtrade poster competition