Preparation work will start this month for the first of 2 brand new cycle routes which are being created after City of Wolverhampton Council secured government funding.

The council was successful in a bid for just over £1 million from tranche 2 of the Active Travel Fund and will use the money to develop the 2 new routes: on the city’s ring road and along Wednesfield Road.

The first will see a new pathway for the exclusive use of cyclists and walkers built through the central reservation along the entire length of Ring Road St Peters.

Traffic lights will enable users of the new path to safely cross over the busy Waterloo Road junction onto Ring Road St Andrews and continue their journey down to Chapel Ash Island via the existing path, which will receive an upgrade under the works.

Initial works to create the pathway will begin on Monday 26 July on Waterloo Road at its junction of St Andrews and St Peters to install a crossing for pedestrians and cyclists and upgrade the existing traffic signals.

The work will take place during the night, to minimise disruption to motorists and is due to be completed by mid to late August.

The signal junction will be switched off on Friday 13 August at 8pm and switched back on Monday 16 August. During this time, 4 way temporary signals will be in operation and while lane closures will be required, they will be minimised to reduce delays.

The work is the first step in delivering a traffic free route for pedestrians and cyclists from the junction of Stafford Street/A4150 (Ring Road) to Chapel Ash Roundabout.

Work on a second scheme is due to start in the early autumn and will see the creation of a continuous cycle route along the A4124 Wednesfield Road from Culwell St junction to link up with existing provision on Wednesfield Way.

This will improve safe connectivity to a range of destinations for cyclists including Wednesfield village centre, New Cross Hospital, Bentley Bridge Retail Park and Springfield Campus.

Funding for the schemes was awarded after West Midlands Combined Authority put in a bid on behalf of all councils in the area and was awarded £13.7 million by the Department of Transport.

Councillor Steve Evans, City of Wolverhampton Council’s cabinet member for city environment and climate change, said: “This is the start of work which will improve transport choices for both pedestrians and cyclists in our city.

“The new pathway, which will connect to our existing networks, will provide a safe option for anyone who doesn’t, or chooses not to drive. It will also give the opportunity for people to build exercise into their daily lives, as well as helping to reduce carbon emissions in our city.

“The new route through Ring Road St Peter’s will enable cyclists and walkers to be isolated away from other traffic, it will link up to the new toucan crossing we’ve created across the Ring Road and to the existing route along Ring Road St Andrews, which will get an upgrade, and down to the other routes at Chapel Ash.

“However, we understand motorists and other road users will be concerned while these works take place and I would like to reassure people that disruption will be kept to a minimum. In addition, our existing car lanes will be unaffected by the scheme as we'll be creating a new lane for cyclists.

“As a city we are committed to improving our infrastructure for more sustainable transport and these 2 schemes will complement the work we did last summer using funding from the first phase of the active travel fund including the creation of a toucan crossing for walkers and cyclists across the Ring Road.” 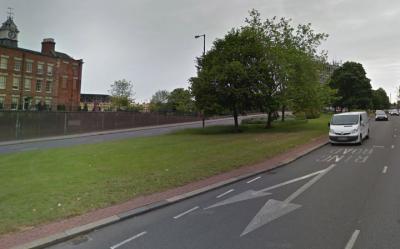 Ring Road St Peter’s, the site of a new cycle and pedestrian route in Wolverhampton