Young people in Wolverhampton were treated to a surprise appearance by the Premier League trophy this week when participants at Wolves Foundation’s Premier League Kicks session in Heath Town Park got to see the famous trophy, decked in the colours of current champions Manchester City.

As part of the league’s 30th Anniversary, the Premier League Trophy Tour is visiting more than 50 professional, non-league and women’s clubs across England and Wales who receive funding from the Premier League. As well as iconic moments on the field, the anniversary is also shining a light on unsung heroes off the pitch, by naming a ‘Community Captain’ for each club.

Wolves’ Community Captain, cohesion coach Matt Elcock, was presented with his award by head coach Bruno Lage at Molineux ahead of the Fulham fixture. Mayor of Wolverhampton, Councillor Sandra Samuels OBE, also presented Matt with a special plaque engraved with his name as an extra memento.

She said: “Matt Elcock is amazing because of the achievements he has made with these children, but also he is such a humble individual. What he’s done to turn the lives of some of these children around is fantastic and the award is well deserved.

“I find sessions like this not just help and support the children but there’s a health benefit here as well. It helps them to keep fit and it’s something for me, as the mayor of this city, that ordinarily a lot of children within these areas wouldn’t be able to afford to participate in, so Wolves Foundation putting this on is a great opportunity for them.”

Local MP Jane Stevenson and Councillor Beverley Momenabadi, Cabinet Member for Children and Young People’s Services at the City of Wolverhampton Council, were also at the event and able to see first-hand the difference the Foundation can make for young people.

“Wolves Foundation do so much in the city and to have the Premier League trophy here as well makes it really special. Matt Elcock is fantastic. I think it’s brilliant that someone who got involved when they were a youngster is now coaching full-time with the Foundation. I think it’s a little bigger than he anticipated, but it’s so lovely to celebrate someone who has done so much for the city.”

Councillor Momenabadi added: “Just seeing young people enjoying themselves, interacting with each other and keeping fit has been really refreshing.

“We’ve had a really hard couple of years because of Covid, which has taken its toll on a lot of young people, not just their physical health but their mental wellbeing as well.

“In the City, we’re really trying to make sure that we offer opportunities for young people to thrive and this is exactly what these sessions are about.”

Wolves Foundation’s Kicks sessions have been taking place in local parks over the summer holidays, allowing 8 to 18 year olds to stay active and engaged in a safe environment during the break from school. 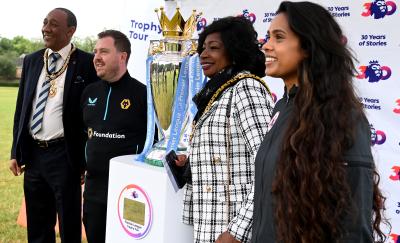 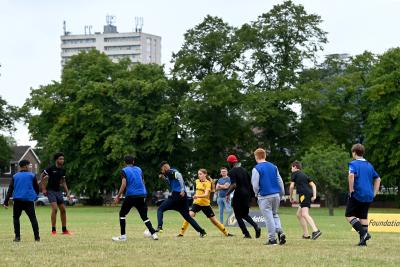