A council worker turned life saver when she and another passer-by prevented a woman from jumping from a bridge in Wolverhampton.

Keosha Gordon was walking along Railway Drive towards the city's railway station at around 9pm on Saturday (18 May, 2019) when she noticed the woman standing on the wrong side of the fence talking on her mobile phone.

The 32 year old Customer Services Officer for the City of Wolverhampton Council immediately dialled 999, but while she was summoning help the woman dropped her mobile phone and looked set to jump.

Keosha – still on her phone to the emergency services – and a man standing close by quickly came to the woman's aid, grabbing her arms and hauling her back over the fence and to safety.

She then stayed with the woman to reassure her as police and paramedics arrived at the scene and supported her for around 40 minutes before the woman was taken away to hospital.

Keosha said: "She was clearly in a very bad place and it was really devastating to see.

"The whole thing felt like a dream and I am still trying to get my head around what happened. I've never been in that situation before and I just acted on instinct.

“I cannot remember exactly what I was saying to her, but I tried to make her feel safe and secure – and to reassure her that there is a lot more to life. She wouldn't speak to the police, she would only speak to me, but I made sure she knew that she would be in safe hands.”

Keosha, who lives in Wolverhampton, added: "The police thanked me for everything that I did; they thought I may have known her because of the way I was speaking to her.

"I don't know if I feel good or happy about what happened, but I do know that I have helped someone who was at the end of their tether. It's scary to think that, if the other passer-by and I had been walking past 2 minutes earlier, we wouldn't have been there to step in, or that if we had been 2 minutes later she may have already jumped.

"It must have been God's plan that we were in the right place at the right time. I just feel really sorry for her that life's stresses have put her in such a position that she felt the only way out was by taking her own life."

The council's Managing Director Tim Johnson said: "Our dedicated staff always go above and beyond to help others, but rarely have actions such as Keosha's had such an impact. I would like to congratulate her on her quick thinking which surely saved this woman's life." 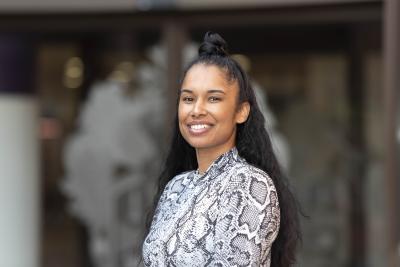 Keosha Gordon saved a woman who was threatening to jump from a bridge at Railway Drive, Wolverhampton, on Saturday evening