Popular shuttle buses back for Grand Slam of Darts

The popular city centre shuttle buses will be back to get fans to and from the Cazoo Grand Slam of Darts at Aldersley Leisure Village from 13 to 21 November.

Buses will be running from Wulfruna Street, costing £2.50 return, and tickets can be purchased from Ticketmaster while buying event tickets.

The prestigious 9 day tournament features 32 players, who initially compete in 8 groups before a knockout phase sees the stars challenge to win the Eric Bristow Trophy.

The Grand Slam has been a major highlight in Wolverhampton since being introduced in 2007, with the legendary Phil Taylor claiming 6 wins in the event before his retirement.

Michael van Gerwen picked up 3 straight titles from 2015 to 2017, while Gerwyn Price won back to back Grand Slams at the Aldersley Leisure Village in 2018 and 2019.

Last year saw Portugal's Jose de Sousa claim a remarkable win as the event took place behind closed doors due to the pandemic - and he will defend his title in front of fans in the return to Wolverhampton this year.

“It is a great, hassle free way to get to the darts for a fantastic evening out - and gives people the chance to socialise with friends and family in the city centre, boosting the night time economy and supporting our hotels due to the event attracting fans from far and wide.

“Wolverhampton is the spiritual home of the Grand Slam of Darts and we’ve been proud to host this event for the past 14 years, welcoming the best darts players in the world and their fantastic, passionate fans who create an amazing, fun atmosphere. We are delighted to have them back after the unavoidable gap last year due to Covid.

“Next year is also shaping up to be a huge year for events in Wolverhampton with the Cazoo Players Snooker Championship adding to British Art Show 9, Creation Day music festival, Commonwealth Games cycling time trial, and the reopening of the refurbished Civic Halls.” 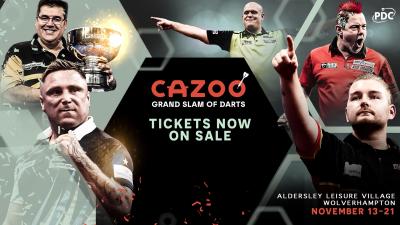