Political leaders have come together to back the annual safeguarding campaign to Orange Wolverhampton and help end interpersonal violence.

Wolverhampton is once again supporting the United Nations' annual 16 day Orange the World campaign, which began on Wednesday, with businesses, community groups and individuals urged to "Orange Wolverhampton" – though because of the Covid-19 pandemic, the campaign is primarily taking place online.

In doing so, they will help raise awareness of Wolverhampton’s drive to end gender based violence, primarily committed against women and girls, including domestic abuse, female genital mutilation, forced marriage, so called ‘honour based’ violence and sexual violence – as well as the support available to victims in Wolverhampton.

And politicians are also throwing their weight behind the campaign. Councillor Ian Brookfield, Leader of the City of Wolverhampton Council and leader of the council’s Labour Group, said: "The Orange Wolverhampton campaign is a vitally important way in which we can all highlight the issue of interpersonal violence, and the help and support that is available to victims.

"These abhorrent crimes range from domestic and sexual abuse to female genital mutilation, forced marriage, so called ‘honour based’ violence, stalking and harassment.

“We want people to be aware of the issues and to seek help, either for themselves or for a friend or relative who may be suffering at the hands of another. I would encourage everyone in our city to get involved and join us in helping to Orange Wolverhampton between 25 November and 10 December."

"This is a worldwide issue, and it's important for us locally to get behind this really important campaign."

The Orange Wolverhampton campaign is coordinated by Wolverhampton Safeguarding Together, the Safer Wolverhampton Partnership, Wolverhampton Domestic Violence Forum and the City of Wolverhampton Council, and is held annually between 25 November, International Day for the Elimination of Violence against Women, and 10 December, UN Human Rights Day.

For more information and to sign up to this year’s campaign, please visit the Orange Wolverhampton website. Details of events and resources are being added to the website as they are confirmed.

Anyone suffering from domestic violence, female genital mutilation, forced marriage, so called ‘honour based’ violence or sexual violence, or knows someone who is, should call the relevant helpline: 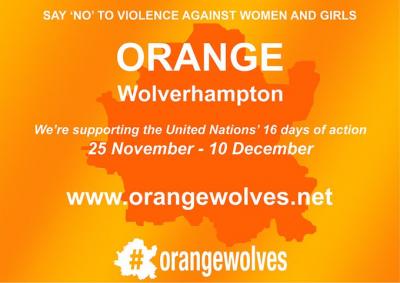