Political leaders have come together to back the annual safeguarding campaign to Orange Wolverhampton and help end interpersonal violence.

In doing so, they are helping to raise awareness of Wolverhampton’s drive to end gender-based violence, primarily committed against women and girls, including domestic abuse, female genital mutilation, forced marriage, so called ‘honour-based’ violence, sexual violence, and stalking and harassment – as well as the support available to victims in Wolverhampton.

And politicians are also throwing their weight behind the campaign. Councillor Ian Brookfield, Leader of the City of Wolverhampton Council and of the council’s Labour Group, said: "The Orange Wolverhampton campaign is a vitally important way in which we can all highlight the issue of interpersonal violence, and the help and support that is available to victims.

"These abhorrent crimes range from domestic and sexual abuse to female genital mutilation, forced marriage, so called ‘honour-based’ violence, and stalking and harassment. We want people to be aware of the issues and to seek help, either for themselves or for a friend or relative who may be suffering at the hands of another. I would encourage everyone in our city to get involved and join us in helping to Orange Wolverhampton."

"This is a worldwide issue, and it's important for us locally to get behind this really important campaign."

Wolverhampton South West MP Stuart Anderson said: "I am proud to be supporting Orange Wolverhampton, a campaign that is running to raise awareness for victims of interpersonal violence – and the support that is available within our city.

"I, along with thousands of others, believe that this campaign is vitally important. Spreading the message that support is available for people irrespective of their sex and making potential victims aware of the mixture of online and in person events taking place could save lives.

"The term interpersonal violence covers many areas, so taking part as an organisation, community group or individual and raising awareness could touch many people’s lives.

"You can get involved and find out more about the events being held at Orangewolves, and for victims – there is help available, you do not need to suffer in silence. Interpersonal violence is an abhorrent stain on our city so let’s work together to turn Wolverhampton Orange."

“It’s our local campaign in support of the United Nations' 16 days of action against interpersonal violence and violence against women and girls. I’m a father of a son and a daughter and I want my daughter to grow up with the same chances and safety as my son has. I hope you will support the campaign too.”

And Wolverhampton North East MP Jane Stevenson added: “I am supporting the Orange Wolverhampton campaign once again this year, to highlight the importance of ending domestic abuse. This comes at a time when the pandemic and lockdowns have made us much more aware of issues such as forced marriages, sexual violence and harassment.

"The Government has recently launched its strategy to tackle violence against women and girls and, combined with the Orange Wolverhampton campaign, I hope we can make a difference and work together to end these awful crimes.”

Anyone suffering from or affected by domestic violence, female genital mutilation, forced marriage, so called ‘honour-based’ violence, sexual violence, or stalking and harassment (or knows someone who is) should call the relevant helpline: 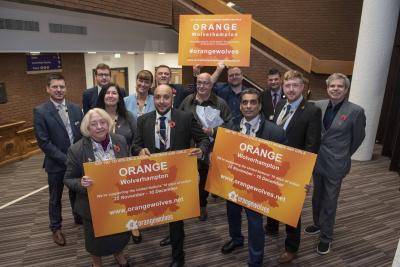 Conservative councillors show their support for the Orange Wolverhampton campaign