Orange flag flying as city says ‘No’ to interpersonal violence

This year's Orange Wolverhampton campaign has officially begun with a flag raising ceremony at the Civic Centre and the opening of a pop-up shop at the Mander Centre this morning (Thursday 25 November, 2021).

The annual safeguarding drive calls on residents, businesses, schools, faith groups, charities and other organisations to turn the city orange between 25 November and 10 December and say ‘No’ to interpersonal violence.

The campaign highlights efforts to end domestic abuse, female genital mutilation, forced marriage, so-called ‘honour-based’ violence, sexual violence and stalking and harassment, and the help and support that is available to victims from local and national organisations.

Councillor Jasbir Jaspal, the City of Wolverhampton Council's Cabinet Member for Public Health and Wellbeing, said: "I am delighted that this year’s Orange Wolverhampton campaign is now underway, and I would encourage everyone to get involved and help us put a stop to interpersonal violence.

“Over 100 different organisations in Wolverhampton take part in the campaign every year, and it’s easy to get involved. You can hold wear orange days, turn your websites and social media channels orange, share key messages about the campaign with friends, family, staff, customers and service users and wear orange ribbons to show your support.

“You can also visit our city centre pop-up shop, which is open on the ground floor of the Mander Centre today and tomorrow from 10.30am to 4.30pm, and join an awareness raising walk on 10 December, so please take part and say ‘no’ to interpersonal violence.”

For more information and to sign up to this year’s campaign, please visit the Orange Wolverhampton website at #orangewolves to find details of events and resources, and to add any events you are planning.

Sally Roberts, Chair of Wolverhampton Safeguarding Together Executive group, said: "The colour orange symbolises a brighter future and a world free from gender-based violence, and the Orange Wolverhampton campaign is an important part of our work to make sure victims know how to get the help and support they need. Please get involved and together let’s turn Wolverhampton orange!”

The Orange Wolverhampton campaign is held annually between 25 November, the International Day for the Elimination of Violence against Women, and 10 December, UN Human Rights Day, and supports the United Nations’ Orange the World campaign to end violence against women and girls.

The Safer Wolverhampton Partnership has chosen to use the term 'interpersonal violence' to clarify that these crimes will be robustly tackled regardless of the sex of the victim, though the campaign recognises that the majority of victims are female. 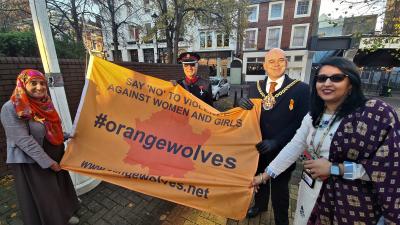 Among those helping to raise the Orange Wolverhampton flag to launch this year's campaign at the Civic Centre this morning were Shaz Akhtar, Near Neighbour Co-ordinator, Dr Satya Sharma MBE DL, Deputy Lieutenant of the West Midlands, Councillor Greg Brackenridge, The Mayor of Wolverhampton, and Councillor Rupinderjit Kaur, right

Orange flag flying as city says ‘No’ to interpersonal violence