This year's Orange Wolverhampton campaign came to a moving end on Saturday (10 December, 2022) with a minute's silence in memory of all the lives lost to, or affected by, the crimes associated with gender-based violence.

And once again individuals, businesses and community groups from across the city came together to help raise awareness of Wolverhampton’s drive to end domestic abuse, female genital mutilation, forced marriage, so called ‘honour based’ violence, sexual violence, and stalking and harassment, and also of the help and support available to victims in Wolverhampton.

Councillor Jasbir Jaspal, the City of Wolverhampton Council's Cabinet Member for Public Health and Wellbeing, said: "The 16 days of action to end gender based violence has once again been supported by many, many people and organisations from across the city.

"And this support has taken many different forms including volunteers making 15,000 orange ribbons for people to wear during the campaign, sharing information about and signposting people to the help that is available to victims locally, talking about the issues with friends, families and colleagues, holding special Orange Wolverhampton events and making financial donations to help fund next year's campaign.

"Meanwhile, well over 100 people joined a series of Lunch & Learn webinars on a variety of topics including how domestic abuse affects older people to the criminalisation of domestic abuse victims, delivered by a number of local and national partner organisations – with attendees from as far afield as North Yorkshire and Wales.

"All of these valuable contributions have helped to raise awareness of the issue of gender based violence, and added to the network of support for anyone affected by these crimes in Wolverhampton. They also provide a clear message that Wolverhampton cares, and that together we say ‘No’ to violence against women and girls, or any gender based or interpersonal violence.

"On behalf of everyone involved in the Orange Wolverhampton campaign, I’d like to say a big thank you to all of you who took part this year.

“While the 16 day campaign provides a focus for, and a spotlight on, our collective activity to end this violence, organisations, communities and individuals are committed to providing help and support, looking out for each other and bringing about an end to gender based violence, all year around."

Anyone suffering from or affected by domestic abuse, female genital mutilation, forced marriage, so called ‘honour based’ violence, sexual violence, or stalking and harassment, or who knows someone who is, should call the relevant helpline: 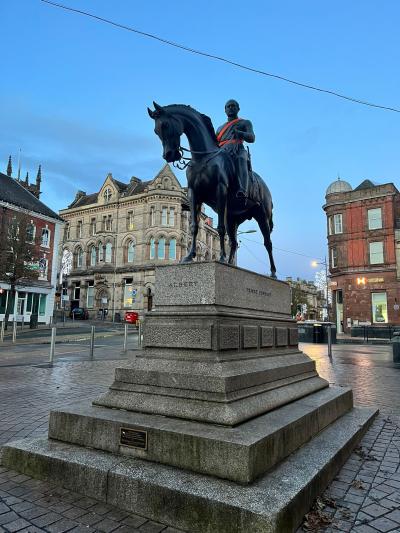