Wolverhampton’s One City Fund has moved into the next stage of the crowdfunding project. The new ‘Feeding Our City’ fund will raise vital money for local food banks.

The crowd funding initiative, a collaboration between the City of Wolverhampton Council, Wolverhampton Voluntary Sector Council (WVCS) and several organisations from across Wolverhampton, is aimed at supporting struggling city families during the current coronavirus emergency.

In a cross party move, the city’s Labour and Conservative ward councillors have come together to pledge £10,000 from their ‘Ward Funds’ to kick start the appeal. The Ward Fund is a pot of money allocated to each ward within Wolverhampton and available to be spent by local councillors to support local projects and activities and tackle issues that matter to residents.

Organisations, businesses and individuals can go to the crowd fund site to donate money, get behind the project and support their city.

It will build on the first successful phase of the One City Fund, which raised more than £24,000. Some 60% of this is being distributed to important city organisations providing vital help to struggling families hit hard by the pandemic. They include Beacon Centre for the Blind, Wolverhampton Citizens Advice Bureau, the city’s Ethnic Minority Council, Gatis Street Community Space, The Well food bank and Wolverhampton Homes’ Money Smart service. The remaining 40% will be made available as small grants to grassroot community groups supporting local people during the crisis.

Donations raised during ‘Feeding Our City’ will go directly to local food banks and not for profit food suppliers supporting people in food poverty in the city, including Adventist Food Bank, Elias Mattu Foundation, Excel/Bilston People, Good Shepherd, The Real Junk Food project and The Well.

Leader of the Council, Councillor Ian Brookfield, said: “I’d like to thank everyone who donated to the first One City Fund last week – it smashed the target within 24 hours. Now we’re urging the city to get behind ‘Feeding Our City’ and support our food banks.

“In the last 5 weeks, demand at our city’s food banks has increased drastically. Supporting this appeal is a simple way of getting behind the city’s efforts to help vulnerable residents during the pandemic so that no one gets left behind.

“All ward councillors, irrespective of political interests, are 100% behind this fundraiser. Local food banks do amazing work, and this is a cause very close to everyone’s heart. It has never been more important to help them stop hunger in our city.

“These organisations are a critical lifeline for many. They do so much more than provide food, supporting people with other issues, deal with the crises they are facing and helping them stave off poverty and despair.”

Councillor Wendy Thompson, Leader of the Opposition at the City of Wolverhampton Council, said: “This is a great partnership and really worthwhile cause, benefitting city families.

“The Conservative Group on the council was unanimous in wanting to offer Ward Funds support to help those who need it most. I’d encourage residents and businesses who are able to make a contribution to get behind this initiative, get involved and make a difference.”

Chief Executive of Wolverhampton Voluntary Sector Council Ian Darch said: “A number of brilliant voluntary organisations and community groups are playing a crucial role in feeding some of the most vulnerable people in our communities. We need to unite behind them and support them to be able to continue this essential work, which is particularly important and challenging during the current crisis.”

Caroline Price, Project Leader at The Well, said: “We are so grateful for the support we receive from the city community. In April we supported 26.9% more individuals compared to the previous 12 months and the highest number ever. Every donation made will enable us to continue to help those in most need across Wolverhampton.”

To make a donation, please visit Spacehive. Organisations wishing to make an application to the small grants fund are asked to email Saffi Price on sprice@wolverhamptonvsc.org.uk. The grants will be administered by Wolverhampton Voluntary Sector Council.

Spacehive, the crowd funding platform powering Crowdfund Wolves, has waived its 5% fee for all projects created during the current lockdown which means all monies raised will go directly to local third sector organisations.

Crowdfund Wolves provides a single portal where people with project ideas can build support from their community, ensure their plans are viable, pitch for funding from the crowd and partners at the same time, and share the impact they have created. For more information visit One City Fund. 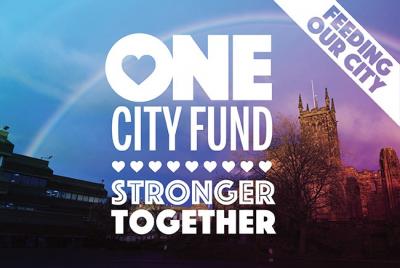 One City Fund - Stronger Together