A new road in Wolverhampton has been named after a popular former city mayor.

Elias Mattu Avenue, in Graiseley, was officially opened today (Monday 2 March) as a tribute to the ex-councillor who died in February 2018.

At the time of his death, aged 59, Councillor Mattu was the serving Mayor of Wolverhampton.

The new road is situated in the heart of the Graiseley neighbourhood where Councillor Mattu had lived ever since he moved from India to England aged nine. He went on to represent the area as a ward councillor for almost 20 years.

His widow, Asha Mattu, who is now also a Graiseley councillor, joined the current Mayor, Councillor Claire Darke and others to open the road today.

Councillor Mattu said: “We are very proud and honoured to have a road named after Elias in the ward that he served for almost 20 years. We are also grateful to the City of Wolverhampton Council for making this possible.”

Mayor of Wolverhampton, Councillor Claire Darke, said: “I know what an honour it is to be Mayor and I know that Elias was so proud to be the first citizen of the city which he moved to as a boy and which became his home and where he raised his family.

“Tragically, his year in office was cut short by illness, but I remember how he fought on for as long as he could despite rapidly failing health. Elias Mattu Avenue is a lasting memorial to a very special person and I was honoured to be able to join his widow Asha to officially open it.”

Council leader, Councillor Ian Brookfield, said: “Elias was a great man, a friend to so many of us and a dedicated councillor who cared deeply for the people of his ward and the city. Having a road named after him, right in the heart of his beloved Graiseley, is a fitting tribute to someone who we will never forget."

Elias Mattu Avenue is part of a 77 home development being built by contractors, Vistry Partnerships, on the site of the former Tower and Works factory.

It consists of a mixture of 2, 3, 4 and 5 bedroom houses, 5 apartments and 2 wheelchair accessible flats. Building work is almost complete.

A quarter of the homes are being set aside as affordable council houses and the remainder are being sold as market housing.

The site was derelict before construction got underway, but in its heyday it was the home of leading car builder Clyno as well as record breaking motorbike manufacturer A J Stevens & Co.

More pictures are available on Flickr and a video from the opening is available below. 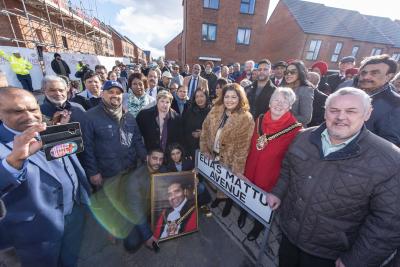 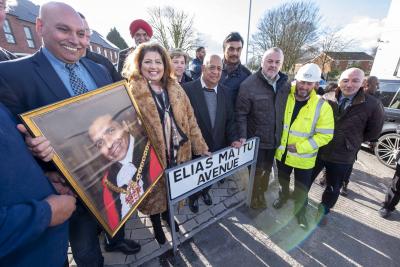