New business Pronto Pasta opens its doors at i10

A new business has opened its doors at the city’s award winning i10 office and retail development.

5 jobs have been created by the business, which is currently open 10am to 4.30pm Monday to Saturday, and neighbours Greene King’s Sunbeam pub.

The showpiece i10 building next to the railway and bus stations forms part of the city’s £150 million Interchange.

Pronto Pasta owner, Baiant Nota, said: “When I see this part of the city it reminds me of places like Birmingham and Manchester - and I think Pronto Pasta will enhance the offer.

“Pasta is a huge cuisine but I don’t see many places where you can get hot pasta takeaway. When Covid restrictions are lifted further we will also be offering a breakfast bar and extensive salad bar.

“I’ve enjoyed good support from the council in Wolverhampton and I’m aiming to grow the business and branch out.”

City of Wolverhampton Council Deputy Leader and Cabinet Member for City Economy, Councillor Stephen Simkins, said: “These have been tough times for small businesses and I am delighted to see a new one springing up in our city centre as we look to relight after the impact of the pandemic.

“Pronto Pasta brings new jobs to the area and the owner has identified i10 as a location where he believes his business can grow.

“The business is in the heart of the Interchange, right next to our new, award winning railway station and - with the MHCLG set to occupy the new i9 office development directly opposite our established commercial businesses in i10 – I’m sure it will prove a popular eating destination.

“This is all part of around £1 billion of investment in the city centre that is either on site or planned.”

As well as encouraging more investment and boosting jobs in the city, i10 forms part of the gateway to Wolverhampton for people arriving off the national rail network or by bus, cycle or tram.

Wider development has seen the completion of a new state of the art railway station, works on a Metro line extension which will include a new stop at the station, and the new i9 office building, which will this year become home to the Ministry of Housing, Communities and Local Government’s joint headquarters. 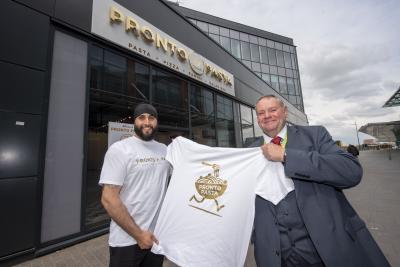