Wolverhampton's Nate Ethan, believed to be the UK's first transgender rapper, has a new fan in the shape of the city’s Mayor, Councillor Claire Darke.

Nate visited the Mayor’s Parlour on Wednesday (26 June) to give a special performance of his new single 'Like it or Not' in front of the Mayor, councillors and staff.

He describes the song as an awareness track which aims to empower all individuals to be themselves and embrace who they are.

The 34-year-old was invited into the Civic Centre after Councillor Darke heard about how he was breaking down barriers in the world of rap.

Nate, who grew up in Park Village and still lives in the city, is currently transitioning from female to male.

Previously known as N'Chyx, the rapper and lyricist has spent a decade in the industry and performed with high profile names in the rap world like D Double E and Tim Westwood.

His story has previously been featured by the Victoria Derbyshire Show on BBC One.

The new single is his first since starting his transition.

It is released on 5 July and Nate will be performing it at LGBT pride events across the country over the summer.

Councillor Darke said: "When I heard about Nate's inspiring story, I immediately invited him in for a chat and to hear his music. I really wanted to meet him and offer the support of his home city.

"The rap world is quite a macho one and Nate has shown amazing courage and determination to be true to himself and carry on rapping as he transitions from female to male.

"Nate is breaking down barriers and his new single is fantastic. He raps with real feeling about who he is, his journey and how he is here to stay whether people like it or not. He will inspire and give strength to others.”

Nate said: "As a rapper, performing in front of a Mayor was a first for me and it was pretty nerve-wracking because I didn't know what to expect.

"But I was made very welcome and I really enjoyed the experience. It means the world to have the support of my home city, I love Wolverhampton. This performance is something I'll never forget.

"I've always loved the city's motto - Out of Darkness Cometh Light. It kind of sums up my story and I hope to get those words into a rap one day." 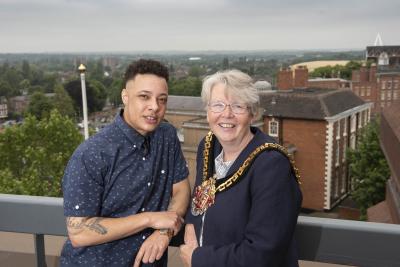 Rapper Nate Ethan with the Mayor of the City of Wolverhampton, Cllr Claire Darke