In a major statement of confidence in Wolverhampton, the Mander Centre has completed the signing of four new major tenants, where over 100,000 sq ft of space has been leased.

Established national brands Matalan, Wilko and B&M, plus newcomer One Below, will all open this year in the 550,000 sq ft Mander Centre, Wolverhampton’s prime shopping centre which attracts over 12 million visitors per annum.

The deals include the refurbishment of both floors of the former BHS department store with and reopening the entrances onto Dudley Street for the new B&M and Wilko stores.

Richard Scharenguivel, the manager of the Mander Centre, said: “Four major national retailers, hugely popular with shoppers, is a significant boost to the choice of stores in the Mander Centre.

“The recent investment in successfully refurbishing the centre is paying off with both brands and the public alike.

“We are giving our customers four more reasons to shop locally in the city where they live and work.”

One Below, the UK’s newest value retailer, opened an 8,000 sq ft store at the Centre earlier this month. The brand is the brainchild of Poundworld founder Chris Edwards, who is targeting the opening of 100 stores in the UK this year.

Matalan, a leading fashion and homeware retailer, is set to open a 23,000 sq ft store in early May, the company’s first in Wolverhampton’s city centre.

B&M, one of the leading variety retailers in the UK, will occupy 52,000 sq ft on the upper mall, taking space in a large unit formerly occupied by BHS. The store is set to open in October/November.

Wilko, the one stop shop that helps families get their day to day lives sorted, will open a 24,000 sq ft unit on the lower mall around the same time.

Recent store openings at the Centre include T.H. Baker, the premium regional jeweller and New Look, who relocated into a new 18,000 sq ft store next to H&M. Further good news came recently when HMV’s new owners confirmed their commitment to the Mander Centre, further strengthening its position as the best retail destination in Wolverhampton.

Director of Regeneration, Richard Lawrence, said: “This is great news for the city. It shows that the City of Wolverhampton is a strong and attractive destination for retailers.

“The Mander Centre is the beating heart of the city’s retail offering and is an important part of how we are working with our partners to reinvent our city centre.

“We are seeing major investment in better connectivity, thousands of new city centre homes set to bring new customers to our businesses, plans for new public spaces and events that encourage longer dwell time, a great leisure and sporting offer that brings visitors from far and wide and an outstanding arts and culture scene, enticing new audiences and visitors.

“All of these initiatives are happening now. They are part of a coordinated groundswell of £1 billion investment on site or planned across our city centre. The continued success of the Mander Centre, supported by Benson Elliot’s investment, is crucial to this.”

In addition to Matalan, Wilko, B&M and One Below, Benson Elliot, the owner of the Mander Centre, is also in discussion with a number of prominent retailers about further new openings in the 103-unit shopping centre.

Jonathan Ratnage, Investment Manager at Benson Elliot, said: “These new lettings signify the confidence that retailers have in both Wolverhampton and the Mander Centre, as the City’s dominant retail destination.

“Whilst the high street is undoubtedly facing some challenges, Wolverhampton’s renaissance is a powerful story and it has created a compelling opportunity for all sorts of businesses to serve an expansive, loyal and eager community of consumers.

“The Mander Centre sits at the heart of the City’s transformation and it is evolving its offer to meet changing customer needs, whilst reinforcing its role as a venue where retail and service businesses alike can prosper. We plan to increase the number of local and independent traders over the coming months through further investment and marketing support. Key to this will be a programme of events and engagement with our customer base and the wider community.”

Cushman & Wakefield, Jackson Criss and BWD are the leasing agents at the Mander Centre on behalf of Benson Elliot. 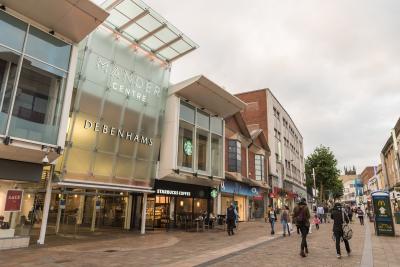 Established national brands Matalan, Wilko and B&M, plus newcomer One Below, will all open this year in the 550,000 sq ft Mander Centre, Wolverhampton’s prime shopping centre which attracts over 12 million visitors per annum