The results for 2 of the most important youth campaigns for 2022 have now been announced, after 11 to 18 year olds across the city cast their votes for the issues that matter to them, and the people they want to represent them,

The national Make your Mark campaign, the largest youth consultation across the country, was combined with Youth MP elections for the first time, streamlining the way in which young people’s voices are heard. Both campaigns took place during February across many of the city’s secondary schools.

Nationally, 434,492 votes were cast nationally in the Make your Mark ballot,  equating to a 7.06% turnout. Wolverhampton was top of the table in the West Midlands, with 10,146 votes cast, resulting in a 39.31% turnout, placing the city fourth for turnout nationally.

Young people voted for the issues that matter most to them, and which they want debated by Youth MPs. Education and Learning was top of the agenda for youngsters in Wolverhampton with Jobs, Money, Homes and Opportunities second. To read the full results, go to Make Your Mark.

The Youth MP campaign in Wolverhampton was equally successful, with 30 young people putting themselves forward to stand as a Youth MP in the city.

Over 10,000 votes were cast across secondary schools and the winning candidates were announced at a Declaration Event at the City of Wolverhampton Council’s Civic Centre last week.

The 2 young people who were successful and will now become Youth MP’s for Wolverhampton were Gregory MacDonald and Lshae Green; they will represent the city’s young people and debate the issues that matter most to them at the Youth Parliament.

Emma Bennett, the City of Wolverhampton Council’s Executive Director of Families, said: “The Make Your Mark and Youth MP ballots are both incredibly important initiatives for our young people to take part in as it gives them the chance to contribute their views on the issues that affect their everyday lives.

“We are delighted with the interest shown by our city’s young people in both campaigns, demonstrating their enthusiasm and commitment to stand up for what they believe in, make their voices heard and improve the lives of others.

“A huge congratulations to both Gregory and Lshae for being elected as Youth MPs and good luck to them both in what’s set to be a very exciting role. We will be working closely with them both as they champion our young people’s voices and help to shape future services across the city.

“Thank you also to all of the students and staff in schools across the city for running both campaigns and especially for helping Wolverhampton achieve such a high turnout.” 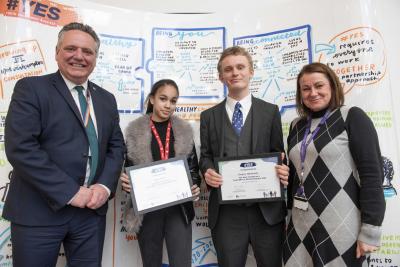