A new music video aimed at raising awareness of the dangers of loan sharks has been launched by a local theatre group in Wolverhampton.

The video, called ‘Loan Shark’, has been produced by Bilston based charity Gazebo Theatre, and takes aims at unscrupulous money lenders who cause misery in communities.

Gazebo’s efforts have been supported by City of Wolverhampton Council’s Public Protection team and the England Illegal Money Lending Team (IMLT) who funded the project by using proceeds of crime money confiscated from convicted loan sharks.

The video aims to prevent residents from falling into the clutches of illegal lenders, as well as highlighting the importance of seeking support.

Young people took part in workshops where they discussed the issues surrounding the use of loan sharks and ways to borrow money safely. The project also gave participants the opportunity to develop new skills, including writing lyrics, performing and recording music, creating a storyboard and production plan for the video and editing digital material.

Gazebo Chief Executive Pamela Cole-Hudson said: "Gazebo are thrilled to have facilitated this exciting project, which gave local young people the opportunity to explore and share important messages about the dangers of loan sharks through music, film, dance and visual arts.

“We hope the video helps to raise awareness of this serious issue and look forward to continuing with our commitment to supporting the economic wellbeing of our communities through projects such as this.”

Gazebo Theatre Company has been providing Theatre, Theatre in Education, out of school activities, mentoring, employment, training, Community Arts for more than 40 years.

Loan sharks are increasingly using social media platforms such as Facebook, Instagram and Snapchat, for predatory lending. They target potential victims and trap them in a spiral of debt with what turns out to be extremely high interest loans, with threatening behaviour to those who can’t afford to pay the extortionate loans back.

Tony Quigley, Head of Illegal Money Lending Team said: “This video offers some very powerful insights into what life can be like for people who have become trapped in a loan shark cycle of debt and misery.

“We would like to thank the young people involved in this project for helping us raise awareness of illegal money lending. It’s important to highlight the issues of this crime as it can usually lead to people getting into even greater debt and financial difficulty, as well as the other problems which can follow such as threats of violence.

“We want to make sure people are aware of where to go for support and encourage anyone who has been affected by loan sharks to access support as soon as possible.”

Councillor Beverley Momenabadi, City of Wolverhampton Council’s cabinet member for children and young people, said: “It’s very important that we get the message out to young people about the dangers of loan sharks, so I would really like to congratulate the talented members of Gazebo Theatre for creating such a memorable film.
“Loan sharks won’t hesitate to prey on our younger and more vulnerable people and can often ruin the lives of their victims and their families.”

“Anyone who needs to borrow money from a safe and responsible lender should contact Wolverhampton City Credit Union – a not-for-profit community bank owned and run by its members and I would encourage everyone to be aware of the signs of loan sharks and to get support if they have been affected.”

How to spot the signs of loan sharks:

Anyone affected by loan sharks can access support on the 24-hour helpline 0300 555 2222 or online at Stop Loan Sharks. Live Chat is available 9am to 5pm, Monday to Friday. 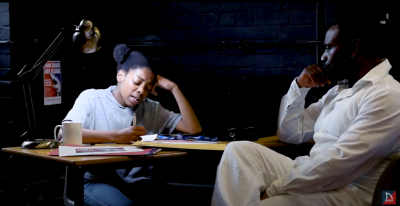