Lasting tribute to former leader of City of Wolverhampton Council

A lasting tribute to honour a much respected former leader of the city council has been officially unveiled in the community he worked hard to develop.

A street within Bilston Urban Village has been named Norman Davies Gardens, after former leader and councillor Norman Davies OBE.

He was one of the driving forces behind the establishment of Bilston Urban Village and was instrumental in securing City status for Wolverhampton at the turn of the millennium. He was awarded the OBE in the 1990s.

Mr Davies passed away in March 2018 and Norman Davies Gardens will serve as a lasting tribute to his dedication to develop the urban village which offers affordable homes and employment opportunities for local people.

Although the road name was allocated in autumn 2019, an official ceremony to mark the naming had been delayed during the pandemic.

At the official event held on Friday (16 September) were Mr Davies’ wife Mary, who made a small speech paying tribute to her husband, and close family members.

"He was a real family man and deeply working class – he revelled in it and was proud of it. He was committed to Bilston and never shied away from decision making.

“He would have been so proud of the development of Bilston Urban Village, which has provided fantastic new homes and employment opportunities for our local residents.”

Pat McFadden MP said: “I’m delighted to see a street in the new development named after Norman Davies. He devoted his life to public service in Wolverhampton, leading the council and in particular our drive to become a city in the run up to the millennium.

“After he retired, Norman and his wife Mary were always a source of good advice and wise counsel for me. I will always be grateful to him for the support and the warm welcome he and Mary gave me whenever I visited.  It’s great to see that a part of the city will always carry his name.”

He also served on the Board of the Black Country Development Corporation and as Chair of Wolverhampton City Challenge, and was an active trade unionist. He worked for many years at Cannon Industries in Coseley. 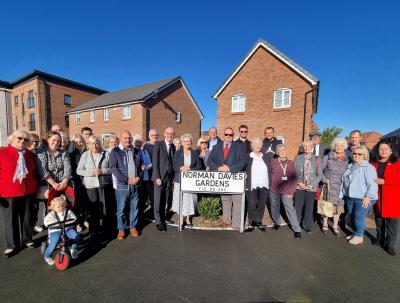