A cowboy builder has received a 2 year, 2 month custodial sentence and stripped from his director title at Wolverhampton Crown Court after leaving a young family without washing facilities and over £26K in debt.

The residents, who wish not to be named, signed a contract with Rollinson agreeing the amount of £4,000 deposit and £4,000 to pay upon completion of the works.

After only 1 day working on the extension, Rollinson requested an additional £1,000 to purchase materials to carry out the works.

Once Rollinson received his first additional payment, he began to request more and more money.

After 8 weeks of work and pocketing £7,610, Rollinson left the property dangerous and incomplete and never returned.

The property was left in shocking, unsafe conditions leaving the family without a functioning kitchen and without water drainage, meaning they were unable to use any of their downstairs water facilities.

The residents' 1 year old daughter could not play outside, and their family dog had to be constantly supervised as the back garden was also left in an unusable and hazardous condition with open drains, large holes and sharp materials taking over their garden.

The consumers called Wolverhampton Trading Standards to make them aware of their experience with Shane Rollinson.

He stated the works required a complete demolition and considered the residents to have suffered a loss of approximately £11,000.

After realising the family were taking legal action, Rollinson began to emotionally blackmail the consumers by sending text messages stating he was going to end his life.

Wolverhampton Trading Standards found the young family not to be the first to fall victim to Mr Rollinson's selfish act.

Bottom of FormCouncillor Steve Evans, Cabinet Member for City Environment at City of Wolverhampton Council said: "I'm pleased justice has been served today, cowboy builders cause a huge amount of stress to the victims who have worked hard and saved to pay for improvements to their home only to be badly let down.

"It's vital that we bring cases like this to the public's attention - to ensure they avoid becoming victims of reckless cowboy builders.

"As a council, we have a duty to protect consumers from rogue traders who break the law and carry out sub-standard work.

"I sympathise with anyone who becomes victim to rogue builders and the emotional and financial damage their careless actions cause.

"I would like to place on record my thanks to the Council's Trading Standards team for their efforts in bringing some justice for the family that has been affected in this mindless and selfish act."

The trusting consumer, who employed Shane Rollinson said: "It is sad to think we chose to trust this man and allow him into our family home, to renovate an extension we have worked so hard to save for.

"It was such an exciting time for us - we had our little girl and we were looking forward to improving our home, as we needed the extra space.

"Instead, Shane left us in a home that was unliveable. We could not wash our clothes or spend time outside in our own garden - our house was no longer a home, we did not feel safe to be there.

"The stress and anxiety we went through because of the actions of a selfish and deceitful cowboy builder is indescribable."

A year on from their trauma, the residents now have the extension they've always wanted after paying a qualified builder £17,000 to correct Rollinson's work to make their home safe for their family. 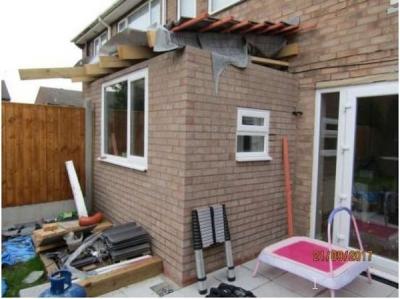