Wulfrunian and Olivier award nominated actress Frances Barber will narrate the story of textiles in Wolverhampton as the immersive storytelling experience StoryTrails arrives in the city this weekend.

She narrates an augmented reality trail through the city centre which explores Wolverhampton’s role in the textile industry and fashion glamour, from Courthaulds Textile Works to department store Beatties and the town centre of the 1960s.

The stories featured on the trail are among hundreds told through ground breaking multimedia technologies as part of the UK’s largest immersive storytelling experience, which is visiting 15 locations including Wolverhampton this summer.

StoryTrails, part of UNBOXED: Creativity in the UK, features digital experiences that invite residents to experience Wolverhampton in a completely new way through augmented reality, virtual reality and an immersive map of the city.

Activities are centred around Central Library, Snow Hill, and on the streets of Wolverhampton this Saturday and Sunday (6 and 7 August).

The augmented reality trail through Wolverhampton, accessed via mobile devices, takes people to the factory floor of Courtaulds Textiles Works, a major employer from 1926 to 1970 whose factory chimneys dominated the city’s skyline, to the glamour of the pink powder room at Beatties, which was part of the Wolverhampton shopping experience from 1877 until its closure in 2019. It also offers a taste of window shopping in the 1960s featuring risqué dresses and hotpants.

The trail was created using film from BBC, British Film Institute and local archives to present a window into the past. Visitors can borrow devices from the library and follow guided augmented reality trails across the 2 day event, or follow the route independently by downloading the StoryTrails app onto their own devices, from the AppStore or Google Play.

Inside Central Library this weekend, an immersive map of Wolverhampton will reveal 10 stories of local people and familiar landmarks, such as ‘The Man on the Horse’ statue – depicting Prince Albert and unveiled by Queen Victoria herself – and Major’s Fish and Chip Shop, a culinary institution established in 1975. The map was created by Grace Gelder using 3D scanning of people and buildings. The 15 minute film plays on a loop throughout the day and a further 20 stories can be viewed on digital devices in the library.

Grace and Sian Macfarlane, who created the trail, are 2 of 50 local and emerging creatives around the UK selected to take part in the development of StoryTrails.

Grace said: “It’s taken months of work to get to this point and we can’t believe we finally get to share it with everyone. It’s truly been a project by Wolverhampton, for Wolverhampton, created in Wolverhampton.

"We’ve unearthed incredible stories of powerful local characters that deserve to be told. We’ve worked closely with BFI and BBC archives to help tell those stories and we’re using new technologies like augmented reality to bring them to life in a way that makes them accessible to all. If you don’t have a smartphone you can borrow one on the day – come along to Central Library and you’ll be able to give it all a go, for free.”

Time travel continues inside Central Library across the weekend, with visitors able to enter digitally created worlds using a virtual reality headset. They can expect to find themselves in the shoes of a rebellious teenager as she discovers her mother’s punk past, take part in one of the many South Asian daytime raves that took place across the UK in the 1980s and 1990s, and hear what earlier generations thought life would be like today.

Historian and television presenter David Olusoga, familiar to viewers of the BBC’s A House Through Time, narrates a further augmented reality experience that invites visitors to turn a dial on a virtual giant radio and travel back in time. From Beatlemania and the flares and haircuts of the swinging 60s, to dancing to the end of the millennium in crop tops and trainers, audiences will experience a potted history of the UK through the decades.

Councillor Jasbir Jaspal, the City of Wolverhampton Council's Cabinet Member for Public Health and Wellbeing, said: "We are incredibly excited to be one of only 15 locations in the whole of the UK to be part of the StoryTrails tour.

"There will be a range of fantastic and free experiences for you to enjoy in and around Central Library this weekend, so please come along and join us on a trip back in time!"

This innovative project is led by StoryFutures Academy, the National Centre for Immersive Storytelling. It was developed by teams of leading technologists and creatives, brought together for UNBOXED: Creativity in the UK, a UK wide celebration of creativity taking place in 2022, including immersive animation pioneers, ISO Design and Nexus Studios, and the company behind Pokémon GO, Niantic. It is brought to life in The Reading Agency’s national network of libraries and by event-making specialists ProduceUK.

Professor James Bennett, Director of StoryFutures and StoryTrails, said: “This is about getting people excited about where they live – helping them connect with stories of their towns and cities from the past and present through a new lens.

"New technologies like augmented and virtual reality can help build these connections and reignite people’s passion for the past. These technologies are for everyone – we want to find ways to engage people from all generations and spark a genuine celebration in each of our incredible locations.”

Martin Green CBE, Chief Creative Officer UNBOXED: Creativity in the UK, said: “StoryTrails uses cutting edge technology to offer people the opportunity to hear about the places they live – the stories of individuals and communities – in a way that has not been done before.” 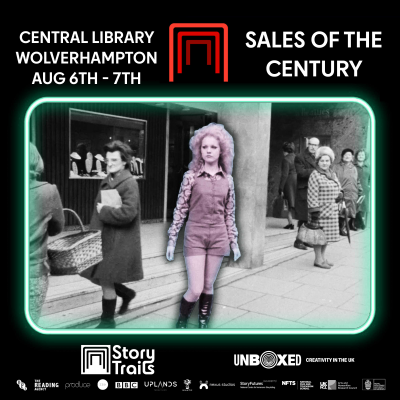