A conman travel agent who tricked hundreds of Black Country pensioners out of their holidays and pocketed their money has today (Friday 3 December) been jailed for 4 years.

Wolverhampton Crown Court heard that Anthony Taylor, who owned TT Tours, used more than £65,000 taken from mainly elderly customers to fund a lavish lifestyle including trips to 5 star hotels in London, gambling, restaurants and payments to a girlfriend.

The 57 year old, of Mount Road, Portobello, was sentenced today after previously pleading guilty to fraudulent trading and 2 other offences under trading standards legislation.

Taylor, who operated from a stall at Bilston Indoor Market, had targeted elderly customers by sending an assistant to visit senior citizens clubs to promote a 5 day coach holiday to Torquay which included travel, hotel, 5 course evening meal, free evening bar and excursions for £99.

Taylor had provided doctored letters which he claimed were from hotels to make the holiday appear legitimate and promised full refunds should the trip be cancelled.

The court accepted his assistant was an honest victim who acted in good faith after also being tricked by Taylor and was completely innocent of any wrongdoing.

300 customers had booked onto the trip which was due to depart on 17 February 2020 and the unwitting victims only discovered they had been duped when they turned up with their suitcases and no coaches ever arrived to collect them.

Taylor went to ground and left his assistant to tell angry and upset customers that the holiday would not be happening.

Enquiries revealed that the hotels in Torquay which had allegedly been booked by Taylor had never received such bookings and had never heard of him or TT Tours.

Some of the conned customers were frail and vulnerable due to old age, some had mobility issues and required special medical care such as oxygen.

TT Tours had never filed any accounts and had no business bank account. All of the customers’ money, paid mainly via cash, cheque or transfer, went straight into Taylor’s personal bank account.

In addition to the Torquay trip, other trips which had been arranged to venues including the Isle of Wight, The Cotswolds, Bath and the Grand National also never took place.

In sentencing Taylor, Judge Mr Recorder Marc Brown described the offences as: “a prolonged and despicable deception of vulnerable elderly people, depriving them of what little money they had, whilst raising their hopes and ultimately leaving them out of pocket and disappointed as they received nothing in return.”

He said that the case was so serious, involving the “systematic defrauding of a large number of vulnerable victims” that only a custodial sentence could be justified.

He was sentenced to 4 years in prison after being given credit for his early guilty plea. He was also banned from being a company director for 10 years.

The case against Taylor, who had previous convictions for similar offences, was brought by City of Wolverhampton Council’s trading standards team.

Trading standards officers set up a stall in Bilston Town Hall to support Taylor’s victims and investigate the case.

Councillor Steve Evans, City of Wolverhampton Council’s cabinet member for city environment, said: “Taylor has been sent to prison and justice has been done for the hundreds of mainly vulnerable, elderly victims who he conned out of their money, left stranded and with no holiday.

“This was a brazen fraud on a large scale from somebody who clearly is without morals and is clearly not fit to run a business.

“It will have added insult to injury to his victims that Taylor used their money to pay for his own luxury holidays in 5 star London hotels.

“With so many victims, this was a huge case for our trading standards team to investigate and I want to pay tribute to their diligence and hard work in successfully bringing this matter to court, especially during a pandemic.”

A proceeds of crime hearing will take place in the New Year. 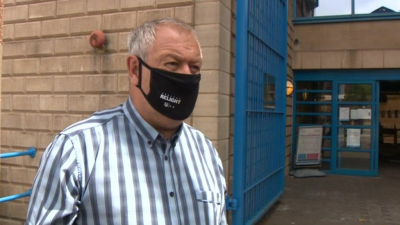