Hundreds of people took part in activities as Wolverhampton marked Dementia Action Week with the city's biggest ever programme of events.

One of the highlights was the annual Wolverhampton Dementia Action Alliance's Celebration, which took place at the Grand Theatre.

It gave an overview of the Alliance's work in the last 12 months and recognised the achievements of individuals and organisations which have worked to make Wolverhampton more dementia friendly.

Those presented with awards included The Grand Theatre, Karen Perry of Fiddle Fingers Quilts, Michelle Monnes-Thomas from FBC Manby Bowdler Solicitors and carers Mithlesh Mittal and Shareen Mettam who have all gone above and beyond to raise awareness of dementia in one way or another.

Dozens of people called into an information and advice event at the Mander Centre to get advice and support about the help and support available for people living with dementia.

Dozens of people also took the opportunity to become Dementia Friends – and better understand issues facing people living with dementia – by attending one of the free Dementia Friends sessions hosted by HealthWatch Wolverhampton and FBC Manby Bowdler at the Mander Centre and at St Aiden's Church in Penn, or by visiting Dementia Friends.

The City of Wolverhampton Council's Trading Standards team were raising awareness of scams – and how people can prevent themselves from falling victim to fraud – while West Midlands Police highlighted personal safety issues.

Compton Care hosted a number of activities throughout the week, as did St Aiden's Church. The Church of the Epiphany in Oxley staged a dementia friendly service for residents at Wulfrun Rose Nursing Home on Wednesday, while Wolverhampton Homes, West Midlands Fire Service, the Royal School and the City of Wolverhampton Council ran an intergenerational session for local people affected by dementia at Swanmore Community Centre.

There were also events hosted by a number of other groups and organisations including Asda Wolverhampton, the African Caribbean Community Initiative Heritage Centre and St Columba’s Day Centre, while over 100 pupils at The Royal School also became Dementia Friends.

Councillor Linda Leach, the City of Wolverhampton Council's Cabinet Member for Adult Services, said: "Dementia Action Week was an opportunity to showcase the great work taking place in Wolverhampton to make our city as supportive as possible to people living with dementia and their families and friends."

Dementia affects nearly a million people in the UK, including approximately 3,600 in Wolverhampton. For more information about the help and support available locally, please visit Dementia. 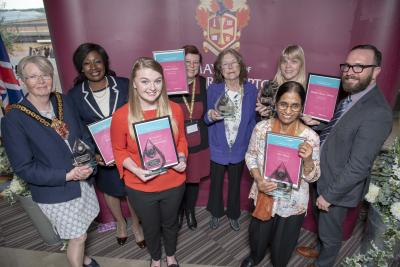