The first UK memorial of its kind commemorating the bravery of 19th century Sikh soldiers has been officially unveiled in Wolverhampton (Sunday 12 September, 2021).

The city’s new Saragarhi Monument, which stands in Well Lane in Wednesfield, is the first statue in the country to specifically honour the fallen soldiers and has been unveiled on the date of the Battle of Saragarhi.

Guests at yesterday’s ceremony included the Jathedar of the Akal Takht and appointed head of the Sikhs of the world, Giani Harpreet Singh, who flew from India to attend, members of the British Army, Saragarhi expert Doctor Gurunderpal Singh Josan who travelled from America and 3 descendants of the battle’s soldiers.

Members of the congregation undertook a massive £100,000 fundraising programme for the monument, with donations made by the temple and the project supported by the community.

City of Wolverhampton Council also contributed £35,000 towards the memorial after it agreed to transfer land to the Gurdwara on a 99 year lease.

The completed sculpture includes an 8 metre steel back plate with commemorative wording, depicting the hills and forts at Saragarhi, as well as the bronze figure of a Sikh solider. The statue, which is 10 feet tall, stands on top of a 6 foot plinth.

The battle centered on an outpost in Saragarhi which was surrounded and attacked by the tribesmen. The 21 soldiers inside the outpost, led by Havildar Ishar Singh, chose to fight to the death rather than surrender. A further man, Khuda Dhad, believed to be a Muslim cook and handyman who was not enrolled as a solider but was employed by the British Army, also died after choosing to join the battle to defend the outpost.

Councillor Bhupinder Gakhal, Cabinet Member for City Assets and Housing at City of Wolverhampton Council and ward member for Wednesfield South, worked closely with the Gurdwara to develop plans for the memorial.

He said: “This is a truly historic moment and one that will live in the memory of the many people who attended yesterday. We have unveiled a remarkable and beautiful tribute to those who made the ultimate sacrifice.

“The 21 Sikh soldiers, and the Muslim cook who joined their ranks, showed incredible bravery. I hope this wonderful memorial will encourage more people to learn about what happened and about the brotherhood and sense of loyalty shared by those men who fought to the end.

“Our Saragarhi Memorial will be very important to a very large number of people - in Wednesfield, in Wolverhampton and across the world. This importance has been recognised by the wide variety of very important guests we have welcomed today.”

City of Wolverhampton Council Leader, Councillor Ian Brookfield, said: “This has been a wonderful day for our city and I am delighted that the council has been able to support this remarkable monument.

“These men made the ultimate sacrifice in the service of the British Indian Army. The Saragarhi Monument recognises the contribution of the Sikh community to our country and celebrates the diversity and the togetherness of our city.

“We hope that the statue and its backdrop will be visited by many who come to pay their respects. We look forward to welcoming these visitors and introducing them to the huge amount our city has to offer.”

Sculptor Luke said: “I am extremely proud to have been asked by the Gurdwara to create the Saragarhi Monument. It is a truly important piece that reflects the diversity of our heritage and shines a light on a part of our history that has been overlooked for too long.

“So many people across the world will understand the significance of today. With artworks like this I want to create visible markers of the under-represented but vital, real people in our communities because when people are represented, they are empowered.” 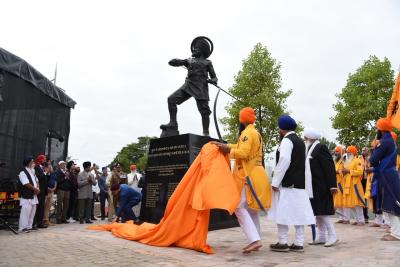 The Saragarhi Monument is unveiled in Wednesfield 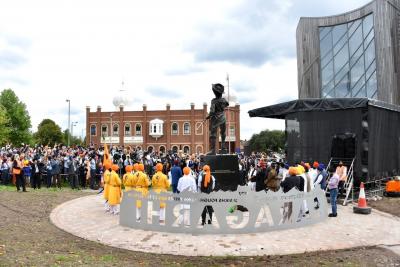 Huge crowd watches the unveiling of the Saragarhi Monument

The procession leading to the Saragarhi Monument 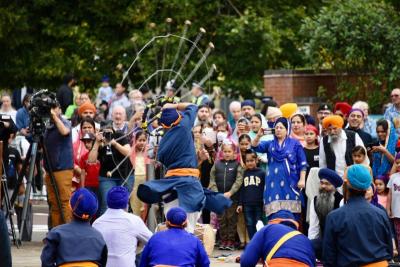