Heroine Lisa to be city Batonbearer for Queen’s Baton Relay

Nursery heroine and tireless charity worker Lisa Potts GM has been unveiled as one of Wolverhampton’s Batonbearers for the Birmingham 2022 Queen’s Baton Relay.

Lisa has been nominated to carry the Baton in recognition of her exceptional bravery and ongoing commitment to children and young people.

Lisa, a former nursery teacher, was proclaimed as a heroine in 1996 when she protected children in her care from a machete-wielding attacker who burst into St Luke’s Primary School, Blakenhall.

Aged just 21 at the time, she suffered severe injuries to her head, back and both arms as she prevented the attacker from reaching the children she was shielding.

Her bravery was acknowledged by Her Majesty the Queen who awarded Lisa the George Medal.

Since the attack, Lisa has done considerable charity work and founded the charity Believe 2 Achieve in 2001 which aims to encourage independence and increase self-esteem in children.

Earlier this year, Lisa became the first Freewoman of the City, an honour bestowed by City of Wolverhampton Council in recognition of all she has done.

Lisa said: “I feel delighted to be asked to be part of the Queen’s Baton Relay. What an honour it is to be part of this historic moment and I am looking forward to being a Batonbearer.”

Councillor Steve Evans, City of Wolverhampton Council’s cabinet member for city environment and climate change, said: “As a city, we are incredibly proud of Lisa; she truly deserves the honour of carrying the Baton.

“The bravery she showed in protecting the young children in her care, while being so young herself, was absolutely astonishing.

“Lisa is such an inspiration and that is what the Commonwealth Games are all about. I would like to encourage our residents to come out and support Lisa and our other incredible Batonbearers as they make their way around the city on 24 July.”

The Birmingham 2022 Queen’s Baton Relay will be coming to Wolverhampton during its final journey through England before the Commonwealth Games.

The Baton will be dramatically parachuted in by helicopter on Sunday, July 24, before inspirational Batonbearers take it on a tour of the city – giving them the chance to highlight stories of how they are striving for change in their community. 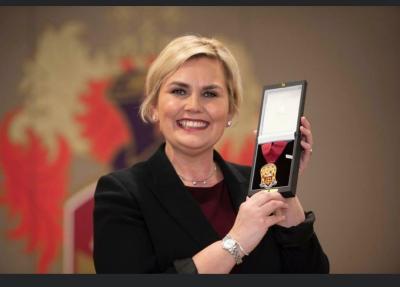